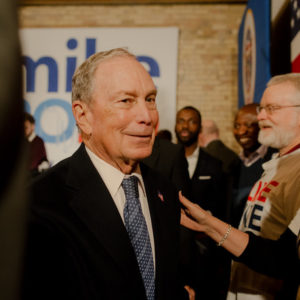 Mike Bloomberg attends the opening of the Mike 2020 field office in Minneapolis, Minnesota on January 23, 2020.
News

One Democrat AG compares accepting this private funding from a political candidate with federal funding from “President Trump’s” Department of Justice.

Bloomberg Philanthropies gave $6 million in 2017 to create the New York University School of Law’s Environment and Energy State Impact Center to provide lawyers to state attorneys general whose sole focus would be on environmental and climate change lawsuits and regulatory actions.

Massachusetts and Minnesota, whose Democratic voters will go to the polls on Super Tuesday, are among at least 10 states where activist attorneys are working for the state AGs offices but are paid through the Impact Center. Their mission is to promote state legal action to advance Bloomberg’s political views, such as lawsuits against energy companies.

Hayes is a former deputy secretary and chief operating officer of the Department of the Interior for Presidents Clinton and Obama.

The email, obtained by Climate Litigation Watch, was sent to attorneys general offices in California, Hawaii, Illinois, Kentucky, Maine, Mississippi, New Mexico, Oregon, Rhode Island, Vermont, Virginia, Washington, and Washington, D.C., on Aug. 25, 2017. The email noted that the State Impact Center would pay the law fellows’ salaries and explained that each would be an experienced attorney in environmental or related law.

New York participates in the program, and in December lost what environmental activists had dubbed “the trial of the century” against ExxonMobil. Originally brought by former Attorney General Eric Schneiderman, the three-week trial ended with state Supreme Court Justice Barry Ostrager ruling that the energy giant had neither misled investors about the impact of climate change nor broken any state laws.

In the run-up to the trial, lawyers for ExxonMobil objected to what they saw as a conflict of interest in having “two employees of private parties who are currently working in the [New York] Attorney General’s Office … selected and paid for by private interests who were pursuing an agenda” involved in the case, according to a court transcript. ExxonMobil attorney Justin Anderson said the lawyers are “compensated entirely by this third-party … that’s funded by Michael Bloomberg’s philanthropy.”

Kevin Wallace, acting chief for the Investor Protection Bureau for the New York Attorney General, accused ExxonMobil of “picking on an individual, a young lawyer.” Emails from Maryland Attorney General Brian Frosh obtained by Climate Litigation Watch, however, indicate that the legal fellows are experienced attorneys.

“Do you know anyone five to 10 years out of school who would be interested in saving the planet from the predations of [former  EPA Administrator] Scott Pruitt and [former Interior Secretary] Ryan Zinke?” Frosh emailed to the dean of Yale Law School. Frosh served as a recruiter for the State Impact Center program, frequently exchanging emails with Hayes.

A spokesman for the State Impact Center declined to answer questions about the program, including whether anyone other than Bloomberg Philanthropies has provided funds for the legal fellows program. The spokesman also declined to comment on whether there was a conflict of interest with Bloomberg running for president while funding assistant attorneys general in at least 10 offices.

“The nonpartisan State Energy & Environmental Impact Center at the NYU School of Law brings academic rigor and independence to its mission of supporting state attorneys general who are protecting existing environmental regulations, addressing climate change and respecting the law,” spokesman Tom Lalley said in an email. He also declined to name any participating attorneys general who are Republicans to back up the “nonpartisan” description of the program.

Most of the attorneys general offices known to be participating in the program declined to comment either on the program or on the potential conflicts of interest accepting funding from Bloomberg Philanthropies.

Massachusetts Attorney General Maura Healey, whose office participates in the program, is suing ExxonMobil in a case that bears several similarities to New York’s. Healey’s office declined to comment.

“Our office accepts fiscal support from President Trump by way of the Department of Justice, as well as NYU, because the Attorney General is independent and only focused on representing the interests of New Mexico,” said spokesman Matt Baca.

Although Bloomberg is a late entrant to the Democratic presidential primary, he has already far outspent his opponents. According to Advertising Analytics, he has spent $209.3 million on broadcast television, $13.7 million on cable, $1.1 million on radio, and $27.2 million on digital ads. His Super Bowl ad reportedly cost $10 million.

Bloomberg’s campaign is entirely self-financed, and he is presenting himself as a centrist in a field crowded with candidates from the progressive left. The Democratic National Committee recently dropped a requirement that candidates receive a minimum number of donors to qualify for debates, prompting an outcry from some former candidates who were unable to meet the arbitrary thresholds that Bloomberg was using to buy his way to the nomination. Bloomberg skipped the Iowa Caucuses to focus on Super Tuesday states.

“God help anyone on the right who tried to do that,” Milloy said. “The Left and allies in the [mainstream media] would be in total outrage mode if they discovered that the NRA or pro-life movement had funded state AGs to carry out the groups’ political agenda.”

A spokeswoman for the NRA scoffed at the privately funded program.

“No one should be surprised,” said spokeswoman Amy Hunter. “This is yet another example of billionaire Michael Bloomberg using his money to impose his personal agenda on the American people. He wants to be emperor of America, and make every citizen his subject.”