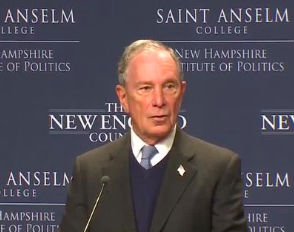 When New Hampshire Institute of Politics director Neil Levesque introduced Michael Bloomberg at a Politics and Eggs breakfast in Manchester last January, he said he’d received a surprising request for a ticket that morning: From his mom.

“This is the first time my mother’s ever asked me to get her a ticket to hear one of our speakers,” Levesque told the crowd.  She was there, and got a shout out from the former New York Mayor, too.

On Friday, when news broke that Bloomberg is considering entering the 2020 race, InsideSources asked Levesque if he’d heard from his mom.

“Texted me this morning,” he said. “She’s very excited.”

That’s not the word to describe the mood of Joe Biden supporters in the Granite State, or across the country. On Friday, Biden came to Concord to officially file for the First in the Nation primary, in a state where his poll numbers are sagging and some Democrats are starting to worry.

“He looks old on TV, he seems rigid,” New Hampshire State Rep. Catherine Sofikitis, a Sanders supporter, told the Washington Examiner. “Democrats think he missed the wave. He’s like a surfer waiting for the big wave, and he missed it.”

Meanwhile in Iowa, his campaign is openly discussing the possibility they will lose the Hawkeye State and insisting that winning New Hampshire isn’t essential to their strategy, either.

“We have what we believe to be multiple paths to the nomination, and I don’t think any other candidate can say that,” Deputy Campaign Manager Pete Kavanaugh told Politico.

A longtime campaign pro in New Hampshire had a different take for InsideSources: “There’s a word for people who lose Iowa and New Hampshire: ‘Losers.'”

Enter Mike Bloomberg. Well, possibly. On Friday he began the process to get on the ballot for the POTUS primary in Alabama.  His political advisor Howard Wolfson said Bloomberg believes President Trump “represents an unprecedented threat to our nation” and “we now need to finish the job and ensure that Trump is defeated.”

“Mike is increasingly concerned that the current field of candidates is not well positioned to do that,” Wolfson added.

A new Harvard-Harris poll asked Democrats about a primary that included potential candidates — like Bloomberg and former Secretaries of State Hillary Clinton and John Kerry — along with the current field. Bloomberg received 6 percent support, lower than both Kerry (8 percent) and Clinton (18 percent), but higher than announced candidates Sen. Kamala Harris (3 percent) and Mayor Pete Buttigieg (2 percent).

Bloomberg’s polling wasn’t any better when he was seriously considering a race earlier this year. He was stuck in the low single digits in the weeks before formally withdrawing. And in a February Morning Consult poll, 44 percent of Democrats said if Bloomberg were their party’s nominee, they would either “definitely” or “probably” not vote for him, or simply sit out the election — making Bloomberg by far the most unpopular potential candidate in the Democratic field.

And how many Democrats would definitely vote for Bloomberg? Just 6 percent. That number for Joe Biden? Forty percent.

There’s no evidence these numbers have changed in the past six months. And even if they have, is Bloomberg too late to be competitive?

‘It’s not too late at all,” Levesque says. “He’s definitely got until next Friday when the filing period closes here in New Hampshire. And beyond that, he has plenty of time to connect with Democratic primary voters in this race.”

Democratic strategist Jim Demers, a veteran of the Gore, Obama and Hillary Clinton campaigns in New Hampshire, agrees that it’s not too late, but notes that few candidates have found success entering at this point in the process.

The fact that Bloomberg’s a billionaire who’s pledged to spend $100 million on his campaign puts him in a different category than most other potential late-entry candidates. And his 12 years as mayor of New York City could give him a gravitas among Democratic primary voters lacking with billionaires Tom Steyer or one-time potential candidate Howard Schultz of Starbucks.

“I’m surprised he’s thinking of getting back in,” Democratic National Committeewoman Kathy Sullivan told InsideSources. “But with his resources, he could definitely have an impact.”

Others argue he’s having an impact already, whether he gets in or not.

“A lot of Democrats feel Liz Warren is too liberal to win the middle of the country, while Joe Biden’s campaign is coasting downhill and not doing anything to pull it out,” Levesque said.

“Bloomberg sees the same race they see. Even if he doesn’t get in, it’s a damning message about the Democratic field overall.”