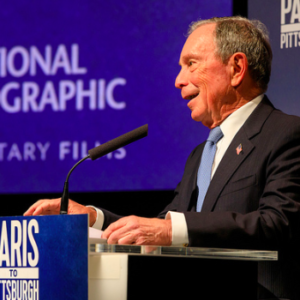 Liberal billionaire and environmentalist Michael Bloomberg spent $6 million establishing the State Energy and Environmental Impact Center at NYU Law School. Last year, that came under scrutiny over a legally-dubious program that places hand-picked attorneys in ideologically-friendly state attorneys general offices across the country to support aggressive environmental enforcement. Now the center is expanding its focus, releasing a new report that highlights six areas of environmental policy where these state AGs are preparing for a “showdown in the courts.”

The report presents six rulemaking areas where these AGs believe they can impede the Trump administration’s regulatory rollback. The list includes many of the most controversial policy changes of the Obama and Trump administrations, including the Clean Power Plan, the Clean Car Standards, regulations on “glider” truck emissions, and regulations governing methane emissions from both the oil and gas industry and from landfills.

“These six rules provide the largest and best near-term opportunities to reduce climate pollution from the highest contributors to greenhouse gas emissions,” the center writes in its report.

The report’s authors believe that halting these rule changes will help improve air quality and public health by reducing emissions. Each of the six rules was a controversial change at the time and debates about the economic and ecologic benefits of repealing them continue.

State attorneys general are leading a push to stop the Trump administration’s regulatory rollback through the courts. Several of them, including Massachusetts Attorney General Maura Healey and New York Attorney General Letitia James, have already pushed lawsuits against Exxon and other energy companies as well.

“Just as the high costs of climate change are becoming starkly obvious, the Trump administration has tried to walk away from its statutory obligation to curb the greenhouse gas emissions that are causing climate change,” writes David Hayes, executive director of the State Energy & Environmental Impact Center. “For the past two years, it has pursued a strategy of avoiding implementation and enforcement of climate rules put in place by the prior administration. State attorneys general stepped in, challenged the legality of these delay tactics, obtained court victories, and stopped it.”

Their opponents see the lawsuits as part of an ongoing effort to restrict the administration from legally enacting its environmental policy. Competitive Enterprise Institute (CEI) Senior Fellow Chris Horner, who uncovered the ties between Bloomberg’s money and the state AGs last year, is not surprised by the announcement, telling InsideSources that the activists had always intended a multi-stage plan.

“The records we have obtained affirm a multi-state campaign principally financed by billionaire climate activist Michael Bloomberg, who created a “State Impact Center” for the specific purpose, according to its initial recruiting email, of underwriting attorney general activism of a political agenda — ‘advancing progressive clean energy, climate change, and environmental legal positions,'” he said.

“Like the ‘Climate Kids’ litigation springing up around the country, this is a plan with several stages to circumvent our democratic process of separation of powers–to impose through the courts what an activist cadre cannot obtain via the peoples’ elected representatives.”

Speaking at a press conference on Tuesday, Healey was blunt about the need for the actions by the attorneys general: “Agencies like the EPA continue to be run and led by former operatives and executives from the fossil fuel industry,” she said. “So there is no surprise that we all subsidize coal at the expense of renewable portfolios. It’s no surprise that they tried to stop energy efficiency rules or rules about carbon emissions.”

The announcement also shows that, despite the attention Horner and CEI have tried to bring to Bloomberg’s cozy arrangement, liberal politicians like Healey have no concerns participating in the program. Speaking at the press conference, Connecticut Attorney General William Tong (D) praised the cooperation between the AGs offices in Massachusetts, New York, and Maryland, saying that they were “constantly on the phone.”

In rolling out the report, however, the attorneys general avoided mentioning the controversy surrounding the Bloomberg-funded program.  It’s a plan that may run afoul of state law and is already raising ethics concerns.

“There’s something awfully wrong when an attorney general has just been sued for records hiding what is on its face an illegal arrangement to accommodate a major donor’s pet project, isn’t asked about it, and feels perfectly comfortable appearing just days later at a press conference promoting the donor’s project,” Horner told InsideSources, referring to a vote in the Virginia State Assembly to ban the AG from accepting an assistant attorney general paid by Bloomberg. “And again isn’t asked about what he’s been caught doing, and has been sued for trying to hide.”