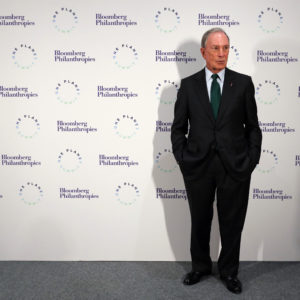 Special envoy to the United Nations for climate change Michael Bloomberg awaits guests before a dinner ahead of the One Planet Summit in Paris, Monday Dec. 11, 2017. (Ian Langsdon, Pool via AP)
News

Under President Trump, environmental policy fights are increasingly being found at the state level, as more liberal states attempt to replace repealed EPA policies. Courts across the country have heard dozens of cases involving energy production, pollution limitations, and other environmental issues brought by state attorneys general. In order to support these efforts, Bloomberg Philanthropies announced a nearly $6 million donation last year to place New York University Fellows in the offices of state attorneys general around the country, specifically to focus on environmental concerns. This program, including how the fellows were selected, and to whom they will report, is now the subject of multiple FOIA requests by a group that wants to better understand the ethics of the program.

In August, the NYU law school announced the creation of the State Energy & Environmental Impact Center. According to the NYU law school, the State Impact Center is dedicated to helping state attorneys general fight efforts to roll back environmental regulation by recruiting and hiring fellows from NYU to serve as assistant attorneys general. It will also provide information and communications support for legal initiatives in support of a number of pro-environmental causes, such as clean energy, climate change, and environmental interests.

Selected fellows will have 5-10 years of experience in clean energy, climate change, and environmental issues and must be available for two years “to provide a supplemental, in-house resource” for attorneys general and their staffs, the program’s website explains. According to interviews with the group’s director, the grants will also help fund litigation against the federal government and state-level enforcement activities.

Who the fellows are and what they have been doing for the last year is unknown. The exact role these fellows will play in state attorneys general offices is the subject of the FOIA requests from Power the Future, a group pushing for increased transparency about the sources and impacts of environmental regulation.

“Power The Future sent out these FOIA requests to have greater transparency behind this curious attorney general fellowship program. Who picked these lawyers? What does their contract look like? What is their scope of work?” asks Daniel Turner, founder and executive director of Power the Future.

Last week, Power the Future submitted FOIA requests for six states (Illinois, Maryland, Massachusetts, New York, New Mexico, and Washington) and the District of Columbia. The requests seek additional information about the fellows: who they are, how much they are being paid, and details about the selection and hiring process. For Power the Future, the issue is one of government transparency.

“I don’t know of any other case where privately funded activists are given the powers of the attorney general’s office to pursue the agenda of their patron,” Turner explains. “We used to call this ‘pay to play;’ now it’s ‘donate to dominate.'”

Turner is worried about the implications of allowing a vocal environmentalist like Bloomberg to have such direct access to the offices determining environmental legislation and litigation.

Although the State Impact Center bills itself as non-partisan, it openly promotes a progressive environmental policy and has strong ties to Democratic politics. The State Impact Center is headed by David J. Hayes, former deputy secretary and chief operating officer of the Department of the Interior for Presidents Clinton and Obama.

“Since January 2017, state attorneys general have taken on an outsized role in advancing and defending progressive policies, regulations and values pertaining to environmental protection, the causes and impacts of a changing climate, and the development of a clean energy economy,” wrote Hayes in the group’s end of year review.

Several of the offices where fellows are working have been at the center of major environmental lawsuits in the last several years, including that of New York Attorney General Eric Schneiderman and Massachusetts Attorney General Maura Healey, who are both involved in the ExxonKnew campaign, and Maryland Attorney General Brian Frosh, who has sued the EPA over the repeal of the Clean Power Plan.

Even so, the goal of the FOIA requests is not to advocate policy, but to promote fair play, says Turner. For him, the concern is why environmentalists are given access to the attorneys generals offices that other groups would not get. Although they are just at the start of the process, Turner has a sense of humor about what they might find out.

“If Mike Bloomberg can buy the state AG’s offices, then Power The Future will hold a fundraiser to staff the Department of Energy with our own attorney fellows,” he joked.