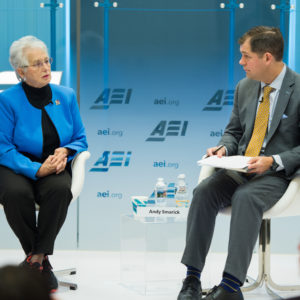 You don’t need a four-year degree from a prestigious university to be successful, said Rep. Virginia Foxx, R-N.C., the chairwoman of the House of Representative’s Education and the Workforce Committee, at an event in Washington, D.C. Tuesday. Foxx’s comments came the day before her committee is expected to pass a bill that would reauthorize a federal grant program that disburses over one billion dollars in support for Career and Technical Education, or CTE, programs.

The event was hosted by the American Enterprise Institute, a free market think tank. AEI education fellow Andy Smarick, who is also the president of the Maryland State Board of Education, introduced the chairwoman and then moderated a discussion with Foxx.

A bill to tweak the Perkins Act, the main CTE legislation on the books in Washington, passed through Congress’ lower chamber with broad-based bipartisan support last year before languishing in the Senate. This year’s bill, which is similar in substance to last year’s, has also earned praise from both sides of the aisle in the House of Representatives.

“We have to get away from the notion that a bachelor’s degree equates with success and with accomplishment,” said Foxx during her prepared remarks. She noted that many Americans go on to have successful careers with only a high school diploma or a two-year post-secondary credential, while stories of bachelor-degree graduates who struggle to find fruitful employment abound.

Backers of stronger supports for CTE say that the American educational system has become too preoccupied with shuttling every student through a traditional four-year college. They argue that a sustained effort to improve vocational education offerings, which are typically quicker and cheaper to complete, would benefit both students and an economy with millions of job openings for skilled workers.

A major hurdle to overcome in attracting students to CTE pathways is not about promising them high paying jobs, (the opportunities are there, say business leaders), but about reducing the stigma associated with a career in what are traditionally labeled “blue collar” professions. One change that educators should think about, said Foxx, is to stop referring to CTE programs as “training.”

She repeated a quote from one of her graduate school professors: “You train animals and you educate people.”

Curiously, Foxx conceded that the existence of a federal program to support CTE offerings runs counter to her constitutionally-conservative ideology. If she had her druthers, the issue would be left entirely to the states and the federal government would have no role in education whatsoever, she said. However, Foxx recognized that with the otherwise noncontroversial program already in place, it makes sense to enact reforms that ensure transparency and accountability for how taxpayer dollars are spent.

Among the adjustments she highlighted in the legislation she is supporting are efforts to better align CTE programs with local job offerings, and better mechanisms to allow parents and students to weigh in on a CTE program’s effectiveness. Foxx also said the bill rolls back some of the secretary of education’s authority in shaping state plans in order to allow for more local control. That last provision, cutting back the federal education department’s role, was a sticking point for Senate Democrats during the last push for Perkins reauthorization, according to some experts.

When asked whether she expects the Senate to adopt the bill, Foxx chuckled and said, “I don’t have a crystal ball.” The upper chamber, whose internal rules grant more power to the minority party, is also consumed with other big-ticket legislative items such as confirming the president’s sub-cabinet appointments and a major health care overhaul. Foxx said that the bill’s backers are still looking for a “champion” to shepherd the proposal through the Senate.

Nevertheless, optimism abounds among the Education and Workforce members who have CTE as a priority. Freshman Rep. Jason Lewis, R-Minn., for example, has made CTE a major focus of his. Among the first pieces of legislation the congressman introduced was a juvenile justice reform package that included expanded CTE offerings for young people in the criminal justice system.

On Wednesday, the committee is expected to vote on an amendment put forward by Lewis that would require states to include information in their state plans about dual enrollment opportunities for high school students pursuing CTE credentials. The amendment would also push colleges to recognize CTE credits earned through dual and concurrent enrollment programs.

In a statement released to InsideSources, Lewis expressed his support for the Perkins reauthorization legislation and added, “Encouraging dual and concurrent enrollment, especially with technical colleges, puts our kids on a pathway to graduating with the skills they need to succeed and move into a good paying job.”