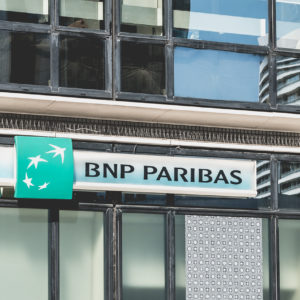 Last fall, environmental activists protesting the construction of the Dakota Access Pipeline and other oil infrastructure projects turned their focus to another shade of green. In an attempt to stop the completion of the pipeline, they targeted a series of banks, including Wells Fargo and US Bank, urging them to pull financing for the project. In the U.S., divestment was on the whole unsuccessful. In Europe, however, environmentalists seem to have won an early battle this week. BNP Paribas, France’s largest bank, announced that it was pulling out of all investments in oil and coal. Although dramatic, the announcement may have little impact.

In a dual-language LinkedIn post in both French and English, BNP CEO Jean-Laurent Bonnafé announced that the company was committed to the goals of the Paris Climate Agreement, which included “making finance flows consistent with a pathway towards low greenhouse gas emissions and climate-resilient development.” He described how, over the past several years, the firm has taken steps towards this end by offering customers “green funds” to channel their investments into environmental projects and reducing its own carbon footprint.  Now BNP is going a step further, by pulling money out of fossil fuel energy.

“Accordingly, BNP Paribas has taken a decision not to provide finance either to coalmining (sic) or coal-fired power plants anywhere in the world,” Bonnafé announced. “Going forward, we will agree to finance only those energy sector companies that are pursuing a policy of diversifying their energy sources.”

In addition to getting out of the coal business, BNP is also pulling out of investments in oil, with a special focus on companies “whose principal business” is shale or tar sands oil. The CEO also states that BNP would cease “financing of projects that are primarily involved in the transportation or export of oil and gas from shale and/or oil from tar sands” and oil and gas exploration in the Arctic.

The announcement marks a shift from BNP’s earlier positions. As recently as two years ago, the bank was moving into the natural gas sector, seeing an opportunity as other banks pulled out of the market.

Since then, market conditions have shifted. Beginning in 2015, several multinational banks began putting limits on funding for coal projects, as did BNP. This timing coincided with both increasing pressure from environmentalists and the rising unprofitability of coal. BNP pledged to stop financing new coal projects and new coal-fired power plants that year, as did rival French bank Société Générale, and Bank of American and Morgan Stanley in the U.S.

After the growth of fracking in the U.S., oil prices have remained low, making the sector less attractive to investors. Earlier this year, BNP was forced to revise its oil forecasats for the end of 2017 and 2018 down, citing rising output in the U.S., Libya, and Nigeria. With prices predicted to stay near $50 per barrel, oil has not attracted investment at the levels it had previously.

This has had particular effect on tar sands production, one of the sectors that BNP singled out in its announcement. The procedure produces a heavy, sulfurous oil that is both more expensive to produce and more polluting. Royal Dutch Shell sold off its Canadian tar sands assets this year.

The true impact of the announcement is unclear. BNP is ranked 17th on the list of international banks providing financing for tar sands, Arctic oil, and other fossil fuels, with investments totaling around $1.94 billion last year. As recently as 2014, the company had more than $3.7 billion invested in the sector.

At this point, significant details of BNP’s new investment plan remain unannounced. These include when it would go into effect and which companies would be affected. The wording of Bonnafé’s announcement is significant. While BNP is pledging to pull out of companies with “principal business” in fossil fuel production, these operations account for only a fraction of the revenues for many of the world’s largest oil companies. As a result, they would fall outside of BNP’s new guidelines. BNP has also stated that companies can continue to do business with the bank if they lower the amount of revenue earned from fracking or tar sands to less than half their business.

In his statement, Bonnafé explicitly stated that the company would continue to work with energy sector partners who have decided to “make environmental issues a central part of their business policy.” This could allow BNP to continue working with many of the world’s largest energy firms, which are making investments into alternative energy and electric vehicles.

The bank has also to announce when it would cease doing business with customers who fall afoul of the new policy.

Given the current regulatory environment in France, however, BNP’s decision makes sense. In September, Paris announced plans to prohibit oil and gas production by 2040. The announcement also provides a public relations boost for a bank that has recently been plagued by scandals. In July, BNP was fined $246 million by the Federal Reserve for “unsafe and unsound practices” in its foreign currency trading division. In July, three human rights groups accused the firm of complicity in the 1994 Rwandan genocide. Back in 2015, it was ordered to pay $8.9 billion to the U.S. for violating sanctions against Sudan, Cuba, and Iran.