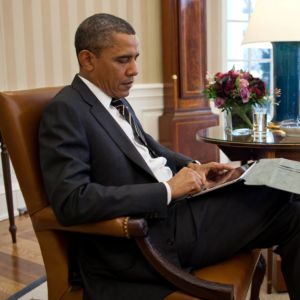 About a month ago, after Donald Trump became the presumptive Republican nominee for president, a number of national news outlets started interviewing David Priess. He was a knowledgeable source on the classified intelligence briefings that major party nominees traditionally receive, firstly because he’d worked as a CIA briefer and secondly because he’d just authored a book on a related subject: “The President’s Book of Secrets: The Untold Story of Intelligence Briefings to America’s Presidents from Kennedy to Obama.”

There was no talk of when Priess gave a noontime book talk Tuesday at the National Archives, but the author certainly kept his audience entertained. His work reveals hidden and often humorous insight into the President’s Daily Brief (PDB), and it’s sure to delight history buffs and political junkies alike.

The presidential daily download of the nation’s secrets began with Harry Truman, and it’s been tailored to each subsequent commander in chief. John F. Kennedy could barely sit still for it, so he carried his briefing in a pocket-sized format, reading periodically throughout the day. Lyndon Johnson, meanwhile, liked to read late at night, so he received a more traditional publication. Then there was Jimmy Carter, who always liked scribbling notes to his staff and thus insisted on lots of white space.

Priess also told stories about presidents receiving their intelligence in person. A highlight was Gerald Ford’s golden retriever Liberty being banished from briefings after her enthusiastic tail wagging nearly knocked over the president’s pipe rack.

The latest PDB innovation is its transition to the digital age. Priess said Barack Obama reads on a “very special, very secure” iPad.

“How does that change the analysis and the assessments in the president’s daily brief? In one way, not much at all,” he said. “It’s still the intelligence analysts’ best take on what’s going on around the world, presented as concisely and precisely as possible. … But it does allow some things that paper alone doesn’t — some multimedia products, videos, graphics.”

InsideSources asked Priess if he had to clear his book with the CIA, and what if anything had been redacted. After all, the author did call PDB “the holy of holies” when it comes to sensitive information. However, he said, “the research here is all clearly unclassified from the documents in the National Archives and presidential libraries.” In fact, there’s no detailing of the substance of briefings from the modern era.

Perhaps as a result of that, Priess said the agency didn’t redact anything he deemed important to the story, though he admitted it did nix some references to “certain events overseas long ago.”