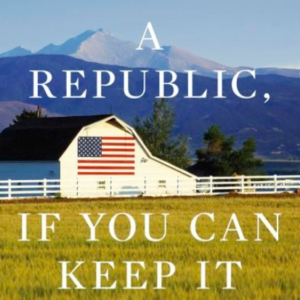 Book Review: ‘A Republic, If You Can Keep It,’ by Justice Neil Gorsuch

“A Republic, If You Can Keep It” is a compelling and important book. Written in Associate Justice Neil Gorsuch’s engaging and lucid style, it provides a comprehensive and accessible insight into Gorsuch as a judge, as a lawyer, and as a citizen. It illustrates Gorsuch’s scholarly depth, forcefully arguing for a version of originalism and textualism that distinguishes him from his predecessors and shows the independence of his thinking.

Gorsuch and I both studied for doctorates in legal philosophy at Oxford in the mid-1990s.  During that period, the very air was infused with the presence of jurisprudential all-stars: Ronald Dworkin and John Finnis were both active at University College, Joseph Raz was at Balliol College, and the memory of British legal philosopher H.L.A. Hart was fresh in everyone’s minds.

Gorsuch and I spent our days in the Bodleian Law Library, working on our dissertations and testing arguments with each other before submitting drafts to our professors. We came to understand a shared vocabulary about core tenets of legal theory. Even then, it was clear that we approached the world from different parts of the political spectrum. Yet those differences were precisely what made those discussions valuable, helping sharpen our arguments.

“A Republic” is a compendium of speeches, writings and opinions from throughout Gorsuch’s career, tied thematically together. It provides a comprehensive picture that is more nuanced than the caricatured tropes that accompany each new 5-4 Supreme Court ruling.

Gorsuch favors an approach referred to as “originalism” (generally used for constitutional interpretation) and “textualism” (a term generally used for statutory interpretation). He acknowledges that, in his view, “the two terms may be little more than different ways to say the same thing” — that statutes and the Constitution should be interpreted according to their “original and ordinary public meaning.”

As Gorsuch states, “an originalist and a textualist will study dictionary definitions, rules of grammar, and the historical context, all to determine what the law meant to the people when their representatives adopted it.”

This approach, contend its proponents, provides the greatest restriction on judges’ ability to select different interpretations that may be arbitrary, politically motivated or unsupported. In this regard, Gorsuch’s strong textualist approach — particularly when combined with his impassioned argument for strict separation of powers — may be distinguished from both forms of legal positivism that merely defer to the exercise of power, and also from natural law theory, which seeks to interpret law in accordance with natural (sometimes, theological) order.

Gorsuch offers a further justification for textualism — that it serves the “public notice” function of placing ordinary citizens on fair notice of what the law requires of them. But, on closer examination, the simple formulation, “original and ordinary public meaning” presents a number of thorny issues. The words “original,” “ordinary” and “public” are each designed to contrast this approach with some alternative way of discerning the statute’s meaning.

“Original” meaning is generally used to fix the meaning at a point in time — the time that the text was adopted into law (as opposed to its current meaning). This can have a large impact in cases where the text was enacted long ago, the meaning of the word has evolved significantly over time, and there have not been many (or any) cases interpreting the specific text.

“Ordinary” meaning generally contrasts with technical or specialized meanings.  This can be a particularly challenging issue, given that most statutes and the Constitution are written in legalistic style, intended for interpretation by lawyers.  Their style is different from the ordinary prose of, say, a newspaper article.

“Public” meaning, to the extent it is not overlapping with “original” and “ordinary,” is used to denote meanings that are accessible to the public, as opposed to meanings that are used to communicate only to those who understand some special meaning attached to the words.

And the meaning of “meaning” is a topic that can fill volumes. Discerning a word’s meaning is not always as simple as merely looking it up in the dictionary.  Context of usage plays an important role, and many words may be used to denote specific enumerated instances, or may simply connote broader categories or concepts.

Thus, interpretation according to the “original and ordinary public meaning” leaves unanswered questions like the following:

Just who is the original public audience? Particularly for very old legal texts like the Constitution and early amendments, is the “public” limited to the Founders, or to lawyers, or does it include a cross section of society at the time?

Especially for language that has a clear meaning today, how is the “public notice” function better served by requiring linguistic archaeology to discern ancient meanings?

What is “ordinary” meaning?  In choosing between legalese and vernacular meanings, which is preferred? Should a meaning be limited to specific denotative meanings, or a more generalized category that could include additional specific instances over time?

Given all of these questions, and the lack of authoritative methodologies for resolving them, even the “original meaning” approach still vests judges with considerable leeway to select their preferred interpretations, even while cloaked in the originalist mantle.

Thus it appears that originalism falls short of providing complete guidance on how to decide “hard cases.” Gorsuch would not disagree. But, for Gorsuch, the debate in hard cases should remain focused on textualist methods of interpretation, and not on outcomes or policy preferences.

Gorsuch acknowledges the potential indeterminacy of some hard cases:  “I accept the possibility that some hard cases won’t lend themselves to a clear right answer.”

He acknowledges that there are “plenty” of “truly hard cases,” cases for which there is no single right answer and for which judges disagree on the conclusion, the analysis, and even on the tools to use in that analysis. But, he contends, the arena for this disagreement must be limited to methods of legal analysis, not policy analysis. Or, as he characterizes it, a distinction between the “exercise of political will” and the “exercise of legal judgment.”

Gorsuch argues forcefully that judges’ role is limited to legal analysis, and that policy analysis should be left entirely to the political branches of government, particularly the legislature. This, he argues, is a matter of both institutional competence and separation of powers. That is, courts are not equipped to make policy choices, but the executive and legislative branches are; moreover, the Constitution enshrines this separation.

However, other judges and theorists have argued that consideration of policy issues is part of judges’ responsibility in deciding hard cases. Gorsuch acknowledges that textualism alone sometimes fails to provide a single, determinate outcome and acknowledges that in some close cases, “lawyers and judges of good faith will debate vigorously what the traditional tools of statutory interpretation suggest about a particular text’s meaning.”

But, he argues, textualism ensures that such a debate is carried out in value-neutral terms. And if “stubborn ambiguity remains” even after all the tools of interpretation have been applied, Gorsuch contends, there are judge-made rules of interpretation as backstops to help provide an outcome.

Gorsuch does not catalog the various tools of interpretation available to judges, and does not attempt to place them in a hierarchy or order of preference. Thus, for hard cases, where the text is indeterminate, Gorsuch’s account leaves unanswered the question why one technique should be preferred to another. Certainly, skilled judges of good faith can muster persuasive arguments for divergent interpretive approaches in the same case.

Gorsuch rejects the absurd results doctrine, except in cases where there is an obvious scrivener’s error.  This was illustrated during Gorsuch’s confirmation hearings, when Senator Al Franken, D-Minnesota, questioned Gorsuch about the TransAm Trucking case, now more familiarly known as the “frozen trucker” case.

Franken suggested that Gorsuch’s opinion in that case produced the absurd, “frozen trucker” result, and Gorsuch explained his narrow view of the doctrine, adding that it could not be used “when we just disagree with the policy.”

On the other hand, Gorsuch himself may have used the absurd-results doctrine.  Gorsuch dissented in the fake burp case, A.M. v. Holmes, which upheld criminal charges against a student who made fake burping sounds in class. Gorsuch’s dissent was based on state-law precedent.  But he also cited Charles Dickens’ quip that “law is a ass” (here, to permit a schoolchild to be criminally charged for making fake burps). This is clearly a nod to the undesirable absurdity of such a result.

While much of “A Republic”  is focused on the judging process, Gorsuch also situates this process in the broader context of law and lawyers in society. He emphasizes the importance of civic (and civil) pluralistic discourse, informed by robust civic education, in a society that provides a legal system that is accessible and affordable to all.

His arguments are thoroughly attuned to the current systemic issues and challenges we face, and again illustrate the depth and independence of Gorsuch’s thinking. In particular, his remarks on the regulation of legal education and the practice of law, in combination with emerging technologies as solutions to the problems of timely and affordable access to justice, are refreshing.

Gorsuch is a careful, scholarly thinker — one who is very much aware of, and committed to, the independent role of the courts in our divided system of government.

Last term, he emerged as the new swing vote on the Supreme Court. Of the 20 cases that were decided by a 5-4 vote, Gorsuch was in the majority on 13 of them, more than any other justice, and only half the time with the conservative bloc.  This voting record, together with his comments on law, society and reform, bespeaks an independent spirit true to his roots in the mountain West.

“A Republic” is a declaration of principles — a road map to Gorsuch’s theory of judging. It will be a compelling read for many audiences: for members of the public who want a deeper understanding of the justice and his judging process, for appellate lawyers seeking insights about how to formulate persuasive arguments, and for scholars interested in jurisprudence.  It is also a benchmark against which to assess Gorsuch’s actual decisions.

His analysis is detailed and thoughtful. It sets the example for civil discourse by providing reasoned arguments, respectfully disagreeing with those who have advanced different views, and explaining (without hyperbole or bombast) the reasons for his disagreement. In the end, whether we agree or disagree with Gorsuch on any particular 5-4 ruling, we would be well-served to take up his invitation to work collectively to keep the Republic.

Chris Mammen and Neil Gorsuch were students together at Oxford University. Mammen wrote this for InsideSources.com.