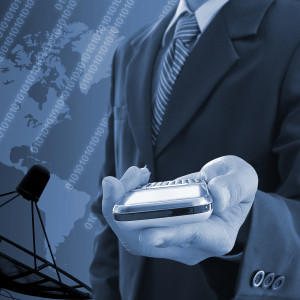 Small businesses have a lot to gain if the country is able to win the global race for better mobile technology, according to a top federal official Wednesday.

Cell phones and and internet of things have fundamentally changed how people work and interact in their everyday lives. They have provided businesses with new tools while also giving rise to whole industries. Many experts, including officials at the Federal Communications Commission (FCC), believe the next generation of mobile technology, known as 5G, will usher in an even greater transformation.

FCC Commissioner Brendan Carr highlighted what his agency has been doing to help the country win the global race to 5G mobile supremacy, and what the implications are for the economy. The Small Business & Entrepreneurship Council (SBE Council) hosted the commissioner as part of a roundtable discussion Wednesday.

“5G is such an important revolution that we are on the cusp of,” Carr said during the discussion. “Really, for me, it’s about enabling the next generation of entrepreneurship. When you look at the businesses and the small businesses from across the country, access to broadband has been one of the key drivers of success.”

Carr adds that previous transitions to new mobile generations had spurred increased business activity which led to economic and job growth. He believes that this newest shift will be even more profound with how much more mobile technology has integrated across different industries.

The FCC released a proposal intended to modernize the regulatory procedures for wireless infrastructure deployments.  The goal is to encourage deployment of 5G wireless networks by streamlining the process to get approval for such a  project. The agency hopes the lower regulatory burden will mean more private investment in underserved regions.

“Where you live doesn’t have to be a limiting factor if you have access to high-speed broadband,” Carr said. “That’s another thing we’re looking at. We need to enable this next generation of entrepreneurs, but we also need to make sure we’re getting more broadband to more Americans.”

The FCC proposed order would exclude the development of wireless facilities under a certain size from historic and environmental reviews. The plan is to encourage the development of many small wireless cells which are critical in  reaching the next generation of mobile technologies – as opposed to the large towers currently being used. The FCC is scheduled to vote on the order March 22.

The SBE Council has been highly supportive of efforts to upgrade mobile technologies nationally. The small business research nonprofit argues that it is critical that policymakers at all levels of government modernize wireless infrastructure policies in order to invite investment in next-generation wireless technologies.

Carr argues that the shift towards next-generation mobile technologies will be critical when it comes to the country competing globally. China, Japan, South Korea, and many more countries are trying to encourage investment or using government funding. The country that leads the way in 5G will likely have a competitive edge.

“We’re in good shape, but we have work to do,” Carr said. “The race is real, and we need to win it. To do that we need to reform our regulatory structure.”

SBE Council has identified access to quality broadband as a key policy priority for this year. It found that many communities, especially those in rural regions of the country, still lack broadband. Those families and businesses don’t have access to the same tools and forms of communication that have allowed so many others to thrive.

The Senate Commerce Committee has also been exploring ways to improve broadband through infrastructure investment. The committee held a hearing Tuesday focused on how data could help determine which underserved communities could benefit the most from improved broadband investment.

Accenture, a management consulting firm, found in a report Jan. 12 that deploying the next generation of high-speed wireless networks could create up to three million jobs and $500 billion in economic growth. The report adds that changes such as streamlining local permitting and regulations are critical pieces to that.