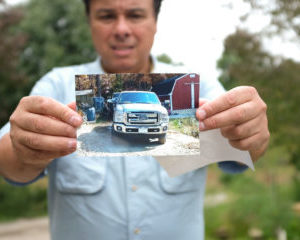 Four years ago, Gerardo Serrano was driving across the U.S.-Mexico border to see his cousin, when two U.S. Customs and Border Protection agents stopped him as he took photos to share with his friends and family.

Serrano offered to delete the images, but the agents were not satisfied. Instead, they detained him and demanded the password to his phone. Serrano declined, telling them to come back when they had a warrant. In response they searched his truck, where they found five low-caliber bullets he had forgotten in the bottom of his center console. The agents never charged Serrano with a crime, but they said he was transporting “munitions of war” and seized his nearly new Ford F-250, worth about $38,000.

Serrano rented a car and returned to Kentucky without seeing his cousin. Once home, he spent the next two years recovering his truck. Since then, he has fought to recover damages for the multiple violations of his constitutional rights. Oral arguments in his federal appeal will start Tuesday in New Orleans.

Serrano started his quest for justice by calling the border checkpoint where the vehicle was seized. He called a paralegal specialist. He filed a request asking to see a judge. He paid a $3,805 bond so he could get a court hearing that never materialized. Despite his best efforts, however, border agents did not budge.

Fed up with the lack of response, Serrano partnered with the Institute for Justice and sued in federal court, demanding that the Border Patrol return his truck and compensate him for violating his constitutional rights by holding onto this property without any judicial process.

Shortly thereafter, the agents returned the truck—to make the lawsuit go away—but they argued that Serrano could not sue them for damages. Under modern interpretations of the law, the U.S. Supreme Court has shielded federal officers from accountability when citizens sue for constitutional damages.

Yet merely returning Serrano’s truck does not make him whole. Losing access to his primary means of transportation for two years came at a price. He had to stop renovating a house in Kentucky that was being converted into a restaurant. Any time he needed to go anywhere, he had to fly or rent cars. And he had to continue making loan, insurance and registration payments that totaled nearly $18,000.

Despite the hardships, a district court judge threw out Serrano’s case in 2018.

Such outrages are common, yet they run counter to a cherished founding principle in the United States: when a constitutional right is denied, there must be a remedy. And government officials who violate those rights must face a penalty — regardless of their federal status.

In earlier times, suing federal officers for violating someone’s rights was a rather straightforward affair. A harmed individual could bring a claim in court, and a neutral judge would determine whether the action of the officer was unlawful. If it was ruled illegal, the court would order an appropriate remedy—such as paying damages. Officers who had acted in good faith or under orders of superiors could go to Congress for compensation.

In other words, it was the judge’s duty to determine whether a right was violated and order damages. If Congress wanted to mitigate the harshness of the judgment, it could do so by compensating the officer. But everyone agreed that the vindication of rights came first and was nonnegotiable.

If Serrano had sued the border agents for seizing his property without a warrant and hearing in 1815 rather than 2015, he would have been able to bring a damages claim for violations of his constitutional rights.

As part of that work, the institute will join Serrano in New Orleans, seeking an order to send the case back to the district court for a determination on whether the Border Protection officers should face consequences for their actions.

Closing the courthouse doors to individuals like Serrano is wrong. It is time to get back to the founding principles of this country and open them back up.

Anya Bidwell is an Institute for Justice attorney and the Elfie Gallun Fellow for Freedom and the Constitution. She wrote this for InsideSources.com.