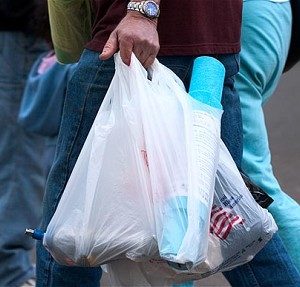 Large Boston retailers may no longer offer plastic bags to their customers, but they can sell recyclable paper bags, compostable or reusable bags–for a minimum price of $0.05 and subject to state sales tax.  In a statement, Boston Mayor Martin Walsh (D), praised the measure as a “big step forward in our work to cut carbon emissions, reduce pollution, and create a cleaner, greener city.”

“For a small change, this policy will deliver a great impact,” said City Councilor Matt O’Malley, the lead sponsor of the ordinance. “We will begin to see our neighborhoods’ streets, trees and gutters cleaner than ever before. I am thrilled to see the progress made in the year preparing for the implementation.”

The city says that it will send inspectors around to make sure that retailers are complying with the new mandate. Retailers still offering free bags will face fines. But how much environmental progress are they really making?

As environmentalists often mention, each year, Americans use about 100 billion plastic bags. Many–though by no means all–are used once before ending up in landfills. Bags can be recycled. More often, they are simply reused. One commonly-cited study by Apco found that 90 percent of surveyed consumers reused their plastic shopping bags as trash can liners, lunch bags, trash disposal, and for pet waste.

After analyzing 12 different categories ranging from energy and water use to their potential to increase greenhouse gases, the researchers found that a reusable shopping bag had to be taken on as many as 34 shopping trips to equal the environmental impact of one plastic bag that was subsequently reused. Meanwhile, most shoppers used a reusable bag only three times before discarding it–which wasn’t enough to overcome the greater environmental impact of its manufacture and shipment.

Meanwhile, bag bans are catching flak for disproportionately impact low-income residents. When Providence, R.I. considered a bag ban of its own earlier this year, the city’s Racial and Environmental Justice Committee voiced concerns.

“Plastic bags are bad, but introducing legislation that negatively impacts poor people is not a solution. Providence has a history of inflicting policy that fines, taxes, or otherwise impairs the ability of residents to thrive-low income residents in particular,” the committee wrote in a letter in April, calling the ban another financial burden imposed by the city on low income residents.

The committee was concerned that the ban would disproportionately impact lower income residents who did not have cars and were more likely to rely on public transportation. They feared that people trying to feed large families or who double bagged their groceries to better carry them on public transportation would find the bag fee burdensome.

In Boston, retailers are responding to the ban in different ways. Grocery chain Stop & Shop says that it will charge $0.05 for paper shopping bags at its Boston stores, donating the proceeds from the sales back to the community. Other stores help promotional giveaway where shoppers could win reusable bags. The ban also applies to restaurants and other retailers, though, and it is unclear how they will handle the transition.