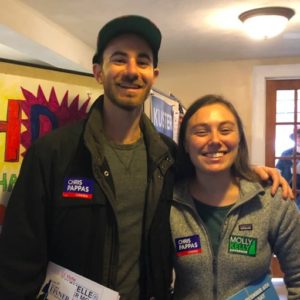 Two Massachusetts activists campaign in New Hampshire for Democratic candidates on the eve of 2018 midterms.
News

Billboards from pro-gun-control groups urging states like Florida to increase regulations on gun owners are nothing new. But the billboard from Stop Handgun Violence that went up last week was a bit unusual due to its location:

It’s in Boston.  As in Massachusetts.

What did anti-gun activists accomplish by criticizing Florida guns laws on a Boston billboard? Not much. But the passions surrounding the 2018 elections have inspired a spark of cross-border, or sometimes cross-district, political activism, as frustrated progressives in blue states like Massachusetts and New York seek ways to make an impact in purple, or even red, environs.  From Massachusetts to Minnesota, Virginia to North Dakota, liberal groups are sending volunteers out to proselytize in conservative districts far from home.

Groups with names like “Swing Left,” “Dems to Go” and “Beyond Arlington” (as in Virginia) are organizing volunteers to take their blue-district values to more competitive races. A coalition of 24 progressive organizations just completed their “The Last Weekend” push, in which they pledged 1 million hours of volunteer efforts on the last weekend before the midterms—much of it by young people from blue communities in purple or red districts.

Likely 2020 presidential candidate Sen. Elizabeth Warren (D-MA) recently released a video on behalf of Swing Left, urging her constituents to volunteer in other states to help Democrats win a Congressional majority. “The clock is ticking, and it’s going to take a grassroots army to get out the vote in districts where it counts the most,” the Massachusetts senator says in the video.  For Massachusetts progressives, that means New Hampshire, New York, and Maine.

Meanwhile, Virginia is the site of an internal migration of sorts, as volunteers from solidly-blue districts in the DC suburbs head to southern Virginia or even across the border into Pennsylvania, canvassing for congressional candidates like Abigail Spanberger (VA-07) and Conor Lamb (PA-18).

This year, liberal groups are willing to spend a lot of money to bring in passionate volunteers. In North Dakota, where Sen. Heidi Heitkamp is polling some 8 points behind Republican challenger Rep. Kevin Cramer, news broke that a group in Massachusetts was trying to recruit volunteers to come out and help.

“Get Out the Vote in North Dakota is looking for volunteers to knock on doors this Fri-Tues (Election Day)!” A screenshot of the message read. “They’ll cover flights and house you!”  Commenters on an area blog mocked the idea of some a Boston accent knocking on doors in Bismarck, but that’s exactly what’s been happening across the country.

Out of state money and effort is nothing new. After all, the national Democratic and Republican committees pour money into state and local races they believe are the most competitive.  The question is what happens when the out-of-state activism starts to look like outside interference?

Or when, as in the case of the Boston billboard, it looks a lot more like virtue signaling than political campaigning?