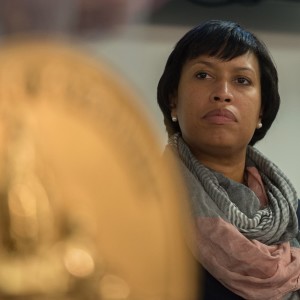 D.C. Mayor Muriel Bowser on Tuesday refused to criticize the federal investigation of her predecessor’s campaign finances — a corruption probe that spanned nearly four years but closed this month without any charges against former mayor Vincent Gray.

Bowser faced questions about the investigation, seen as a key factor in her election victory over Gray last year, while appearing on NewsChannel 8. Host Bruce DePuyt recalled how prosecutors accused the former mayor of intimate involvement with an illegal “shadow campaign” that helped finance his election in 2010. Gray denied any wrongdoing, including knowledge of the scheme, but the allegation of his participation came just weeks before the 2014 Democratic primary and ensured his defeat.

“Is this how to run a railroad?,” DePuyt asked Bowser, voicing a concern that many District politics observers have expressed that U.S. Attorney Ron Machen, who resigned in October, acted inappropriately.

The mayor expressed no such misgivings. “The bottom line is people want to make sure that our election in 2010 was fair,” she said, noting that prosecutors did convict half a dozen people connected to the conspiracy.

“I think it’s pretty obvious that some appropriate questions were asked,” she added.

“I look forward to getting on with the next chapter of my life, which will no doubt be dedicated to service,” Gray said in a statement after the announcement that he wouldn’t be charged. “Here in the District and around the country many people have had their faith in our justice system tested. Justice delayed is justice denied, but I cannot change history.”

In subsequent media interviews, the former mayor asked for apologies from Machen, lawmakers who called on him to resign and some members of the press who engaged in what he called “a witch hunt” against him.