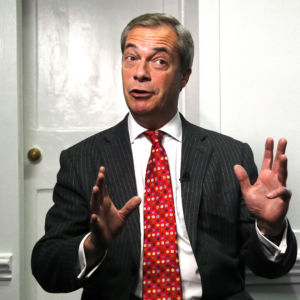 Brexit Leader Nigel Farage and the Rebirth of National Sovereignty

Farage became a well-known international figure for his support of the Brexit movement. The movement has argued that the United Kingdom should withdraw from the European Union. Farage is optimistic that support for his movement, and the election of President Donald Trump, demonstrates a political shift back to national independence.

“I guess in terms of this global revolution, in terms of this more conservative approach to life, believing in the nation state, believing that immigration actually does matter for the shape of our communities, I guess normally we follow America, but for once I think America has followed us,” Farage told InsideSources. “So that’s why I’m here, that’s why I’m a part of it.”

The Brexit movement became a highly controversial debate in the U.K. and abroad. U.K. voters, however, backed the movement during a national referendum last year. The American people soon after voted to elect Trump, who also championed the idea of national independence.

“I’m fascinated to watch the parallels going on in this city compared to London in the sense that we now have a government that wants to put Brexit into plan, but we have a bureaucracy, and a civil service, and media that is trying to stop us,” Farage said. “That is exactly the same here. We have a president here that is trying to put in place the things that he was elected, and everyone is trying to stop him.”

Farage is a longtime member of the European Parliament. He is also a member and vocal advocate for the U.K. Independence Party. He served as party leader for several terms but eventually resigned last year. He discussed his views during the Conservative Political Action Conference (CPAC) outside Washington D.C.

“This concept of sovereignty, of nation-state democracy, this mattered to our forebears so much, they went to war over it,” Farage said. “We fought two world wars to preserve liberty, freedom, and democracy, and yet the social democratic politics that have overtaken Britain, Europe, and America were happy to give that all away.”

The political shift back to national sovereignty comes at a time of increased globalization. The debate has primarily centered on immigration, trade, and national security. Trump has made immigration a cornerstone of his presidency. He has called for increased border security and an immigration system that prioritizes domestic workers.

“The opposition may be noisy, but what I’m seeing in England with the polls, and what I’m seeing with Trump’s approval ratings is actually fair minded people in the middle are increasingly saying, we have a democratic result, let’s go with it,” Farage said. “Let’s give the man a chance.”

Those in support of globalization argue it will yield better economic and social results. New technologies, trade deals, and immigration have eliminated many barriers that once existed in the international markets. They believe it will open up better opportunities for companies as well as domestic and foreign workers alike.