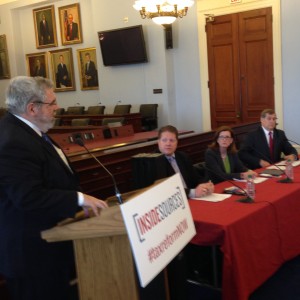 Broad Agreement on the Need for Tax Reform. But Can Congress Make It Happen?

Reforming the tax code was a focal point for Tax Day on Capitol Hill.

“We have an environment to make some progress” on tax reform, said Congressman Dave Reichert (R-WA) at the InsideSources “Road to 2016: Informing the Tax Debate” forum.

Reichert, who is Chairman of the Select Revenue Measures Subcommittee of the Committee on Ways and Means, told the audience “everything is on the table,” and he sees areas for compromise between the Republican-controlled House and Senate and President Obama.

Reichert explained that the Ways and Means Committee has an excellent starting point following its review of the tax code, the discussion draft it put forward, and the feedback the committee has received from businesses and individuals across the country. Congress is already acting on some areas where there is bipartisan agreement, and Reichert cited bills addressing Section 179 deductions and S Corps, along with upcoming votes on sales taxes and the inheritance tax.

“Our effort is to get as much done as we can, and then we will be prepared if nothing might be accomplished today for where we might go in 2016,” said Reichert, recognizing the potential challenge of passing legislation in a presidential election year.

Addressing a question from the audience on the corporate tax rate, Reichert said, “Our goal is to get to 25 percent effective tax rate.”

The US currently has the highest top statutory tax rate in the developed world at 35 percent. Many large corporations and multinationals are able to reduce their tax burden through loopholes or shifting their profits overseas. Smaller domestic companies are hit hard by the tax, and the economy suffers as multinationals choose not to repatriate profits. In order to make a corporate tax rate reduction revenue neutral, Congress must identify loopholes and tax shelters to close, explained Reichert.

Congress is simultaneously working to fund projects to fix deteriorating infrastructure. Reichert sees opportunities to pay for these fixes while modernizing the tax code, such as through repatriation of foreign earnings.

Following Chairman Reichert’s remarks, David Cay Johnston, who won the Pulitzer Prize for his reporting on tax policy, moderated a discussion about the challenges of the current tax code. The panelists agreed broadly about the concerns Reichert raised about the high corporate tax rate.

“The US Government has been chasing corporate profits from 40 years, 50 years. And every time they try to implement something new, another new way of dodging taxes comes up,” explained Dr. Jason Fichtner, a senior research fellow at the Mercatus Center. “We now today have more exemptions in the tax code than we had before we passed the 1986 tax reform act.” The high statutory rate creates incentives to game the system, said Fichtner.

Identifying and lobbying for loopholes and shifting profits is easy for large corporations but not small businesses. Phil Krinkie, a small business owner and former member of the Minnesota House of Representatives, stated, “The most confounding and frustrating thing for small businesses is that we have no idea of what is currently being shoveled around. There’s no ability to be able to think about what you’re going to do next year because Congress sometimes acts as late as January to implement changes in last year’s tax code.”

Tax reform is “front and center,” said CEO & President of the Small Business and Entrepreneurship Council Karen Kerrigan. Her concern is with the “uncertainty that business owners and entrepreneurs have had to endure over the past 8 to 10 years in terms of sunsetting provisions, retroactive extensions – they can’t plan on spending, capital expenditure issues because of Section 179. It’s costing them a lot of money to comply.”

Much debate remains, and while the House has started to pass legislation, the Senate is slower to act. The White House is broadly supportive of reform, but it remains to be seen whether bipartisan agreement can be found.

So on this Tax Day, instead of reform, Americans must contend with a tax code that takes over 70,000 pages to explain.