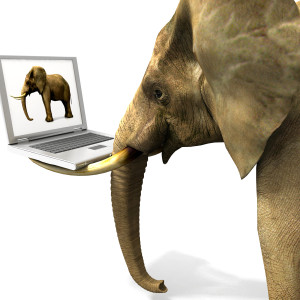 An ancient parable is worth retelling since it illustrates that many who refer to broadband are not taking the necessary holistic view of our broadband Internet ecosystem.

A long time ago in the valley of the Brahmaputra River in India there lived six men. All had been blind since birth. One day they began to argue. The object of their dispute was the elephant. Since each was blind, none had ever seen that mighty beast of whom so many tales are told. They decided to go and seek out an elephant.

With a guide, they set out early one morning in single file along the forest track. It was not long before they came to a forest clearing where a huge tame elephant was standing. The six blind men became quite excited; at last, they would satisfy their minds. They began to take turns to investigate the elephant’s shape and form.

As all six men were blind, none of them could see the whole elephant and approached the huge animal from different directions.

The first man cried out, “It is as sure as I am wise that this elephant is like a great mud wall baked hard in the sun.”

The second man exclaimed with a cry of dawning recognition, “I can tell you what shape this elephant is – he is exactly like a spear.”

The others smiled in disbelief.

“Do you not see,” said the third man – “this elephant is very much like a rope.”

“I thought as much,” the fourth man declared excitedly. “This elephant much resembles a serpent.”

“Good gracious,” the fifth man called out, “even a blind man can see what shape the elephant resembles most. Why he’s mightily like a fan.”

At last, it was the turn of the sixth fellow, who proclaimed, “This sturdy pillar feels exactly like the trunk of a great areca palm tree.”

Their curiosity satisfied, they all linked hands and followed the guide back to the village. Each had felt the elephant for himself and knew that he was right. For depending on how the elephant is seen, each blind man was partly right, though all were in the wrong.

The current broadband policymaking process in the United States should not follow the moral of this fable, nor is it destined to do so.

As FCC Chairman Tom Wheeler recently noted: “Our challenge – and by ‘our’ I mean both industry and government – is to do everything in our power to ensure that the United States has the world’s most dynamic and competitive broadband Internet ecosystem with a virtuous cycle of new investment, new innovations and new services. It is a lofty goal. But I have no doubt this is achievable. This is the country that invented the Internet! The future starts here in the United States of America.”

The broadband Internet ecosystem writ large is not particular only to the United States, of course. All nations that have or will be developing broadband as a central engine of economic, social and cultural prosperity will rely on the same broadband Internet ecosystem elements – applications and content, devices, and networks. The same forces of supply and demand also will be applicable as economic realities.

The challenges we face at home are based upon a common set of technologies and protocols that all other countries are confronting, as well. Through timely and reliable data, we now are able to gauge how well particular countries are performing in broadband Internet ecosystem development, viewed in a global competitive context. This analysis will help government policy formulation to be based on the necessary and more complex foundation that the broadband Internet ecosystem represents.

In adopting durable future-oriented policies that promote the entire broadband Internet ecosystem, government policymakers must take a more holistic view of that ecosystem. A continuing focus on it is the best route to establish principles that sustain and deepen Internet development for the future – a truly Wide Open Internet.

The fundamental policy challenge ahead is not how to develop long-term solutions to short-term problems that may arise in one part of the broadband Internet ecosystem. Rather, the focus should be on how the United States develops the best business and government environment to promote Net Vitality. The nation will be watching, and so will the rest of the world.  Dozens of developing countries are seeking workable models to create a balance among applications and content, devices and networks. Such a balance is crucial to developing a level of innovation and investment that helps these countries create their own Net Vitality environments.