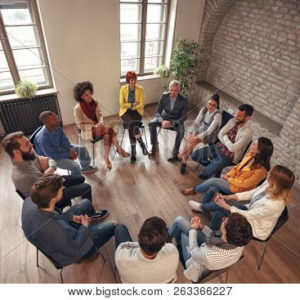 Almost every day, a group of us gather in the Bush Institute’s Reading Room to enjoy lunch. We have different cultural, religious, political and geographic backgrounds. At the table, we discuss everything from current events to family to pop culture. There are always differences of opinion, but we come away with our mutual respect intact.

Coincidentally, our lunch community is similar to an organization called Village Square, a group that arranges civic conversations over meals. By doing so, they encourage a civil clash of ideas that they believe breeds understanding, moderation and shared solutions.

Why am I telling you this? In the United States, a variety of experts identify the loss of community and interpersonal connections as a contributing factor in a declining sense of common purpose, belonging and American identity as defined by a set of shared values regardless of ethnicity, religion or politics. President Bush commented on this when he observed two years ago: “At times, it can seem like the forces pulling us apart are stronger than the forces binding us together. Argument turns too easily into animosity. Disagreement escalates into dehumanization.”

In his book, “Them,” Senator Ben Sasse, R-Nebraska, explores the consequences of losing our sense of community in the United States. Chief among them is an epidemic of loneliness across the country. That loneliness makes us susceptible to “anti-tribes” that rely on negative rallying points such as isolationism and xenophobia. All of this is exacerbated through social media and political opinion talking heads.

Arthur Brooks, the recently departed president of the American Enterprise Institute, calls this our “culture of contempt.” As Brooks has written, in the United States it has given rise to a level of polarization unseen since the Civil War; let that sink in. All this animosity is causing us physical and emotional trauma, but as polarization increases, it also erodes our cohesiveness as a country.

Similar behavior seems to be infecting populations globally. The rise of populist movements, particularly in consolidated democracies, may reflect a global culture of contempt. Populism preys on people’s frustrations and offers “easy answers” to those who have lost faith in the system’s ability to deliver for them. It also degrades democratic institutions that represent majority interests while protecting minority rights. With the erosion of traditional communities that reinforce positive character traits and a sense of belonging, people are more susceptible to the allure of populist movements that provide “boogeymen” on which to focus their anger.

Community-building can be a potent weapon in combating the culture of contempt and populism, though we may need to rethink our approach. The world is entering a new era where many of today’s jobs will be automated by robots and AI.

People, assuming they have the means, will need to adapt and follow the path of opportunity wherever it leads. It will be incumbent upon us to more actively seek out opportunities for community. As such, we may need to expand our search beyond fixed locations in towns and neighborhoods.

The Bush Center’s domestic and international leadership programs are designed to bring people together from different religious, ethnic, geographic and political backgrounds who might not otherwise meet. Through the process, our scholars come to the realization that their values are shared by fellow participants and, despite differences of opinion, they develop relationships that grow into enduring friendships.

These leadership programs represent a method for community-building through prolonged engagement without a shared location. Even so, in-person communication is still crucial to the process; research has shown how we dehumanize others, particularly in disagreement, without that interaction.

Take Burma as an example. Home to one of the world’s longest-standing civil wars, numerous ethnic groups across the country are persecuted by the military. Among them, a Muslim minority known as the Rohingya have been subjected to attacks that drove more than 700,000 Rohingya into neighboring Bangladesh.

This has been a divisive issue for Burma and the international community. The majority Buddhist population has taken cues from the military and civilian government, rejecting labels of ethnic cleansing and arguing that foreign governments don’t understand the nuances of the Rohingya issue.

Against this backdrop, the Bush Institute’s Liberty and Leadership Program has supported a network of rising leaders from across Burma that includes Rohingya, Buddhists and Christians forging friendships and joining forces to make their country a better place. It all starts with the simple act of providing a venue where they can meet each other and engage in person.

When this happens, there’s no hiding behind texts or anonymous social media posts. Indeed, they are confronted by the humanity of their fellow citizens regardless of background or disagreement on controversial issues.

This is foundational for more constructive, civil dialogue. In doing so, we’ve witnessed the creation of a diverse community of leaders who genuinely care for and support each other.

That doesn’t mean there’s blanket agreement on every issue, but an underappreciated aspect of community is creating space for respectful debate and disagreement. Thanks to the bonds we form within our communities, we’re more open to compromise, seeking collaborative solutions that aren’t zero-sum because we’re invested in others sharing the benefits.

Liberty and Leadership Program alumnus Aung Kyaw Moe has dedicated his young life to spreading community throughout Burma. His organization, the Center for Social Integrity, has teamed with other LLP alumni to build bridges among different ethnic peoples in Burma’s troubled Rahkine State — home to the Rohingya crisis.

Aung Kyaw Moe explained that communities in Burma “lack opportunities to interact with other ethnic or religious groups. The more communities can mingle and interact, the more they will come to know and trust one another. … The absence of inter-communal interaction is what leads to fear among communities of Northern Rakhine State, a fear of the unknown. It divides people and contributes to rumors and misinformation — a critical problem throughout Burma today.”

Such stories demonstrate how communities work for the betterment of society. Investing in long-term, interpersonal relationships starves the epidemic of loneliness that feeds the global culture of contempt. Through our communities, we’re able to rely on others to support us in times of needs, encourage our best attributes, and temper our worst impulses. Anything less invites fear to replace understanding, hatred to replace compassion, and despair to replace hope.

Think about how you can build your own community that reinforces general decency. Don’t think you’ll be able to create meaningful ties in your neighborhood? Start a lunch bunch at work, join a weekend running club, apply for a program that challenges your worldview. Whatever form it takes, meet people face to face, and build a community that makes the world a better place.