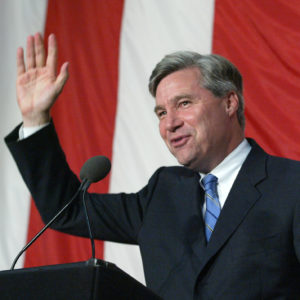 We’re not yet at the point of burning heretics in the street — but things are trending in that direction.

There are speech codes on college campuses that stifle any deviation from politically correct opinion and “hate crime” laws that go beyond what the offender actually did — such as commit a murder — and penalize his attitude.

Merely to express doubt about various orthodoxies is becoming actionable. An offense against the state.

Or soon will be.

This week, a resolution will be introduced in Congress by Sen. Sheldon Whitehouse, D-R.I., and Rep. Ted Lieu, D-Calif., that seeks to punish dissenting opinions on the subject of climate change, the assertion not merely that the climate changes (it does) but that man’s activities are the cause of this change (which is by no means established fact).

The object of the exercise will be to sanction anyone who is — as the saying goes — a “denier.” For example, the IRS could — and already has — threatened the loss of tax-exempt status for think tanks and research organizations that publish anything that questions the climate change orthodoxy.

The resolution — of which this writer obtained a draft copy — uses challenging language such as “deliberately cast doubt” … on the assertion that human activity is causing the climate to change.

But how is that to be ascertained exactly? It presumes malice rather than simple questioning.

The term “climate change,” meanwhile, is itself — to use a weather-related term — shady.

Of course the climate changes.

There are heat waves and deep freezes; sometimes it rains and sometimes it doesn’t. The geological record contains evidence of several very dramatic changes in the Earth’s climate long before the first Neanderthal chucked a spear at a woolly mammoth.

Atmospheric concentrations of carbon dioxide may indeed be higher today than 100 years ago — but they were also many times higher millions of years ago, when dinosaurs roamed the Earth.

Which was millions of years before humans roamed the Earth.

Your local (and national) weatherman has a pretty spotty record predicting whether it’s going to rain tomorrow (let alone next Saturday) and yet we are supposed to just BELIEVE that climate change caused by human activity “is going to cause catastrophic harm to the environment in the years ahead.

Because this is religion we’re talking about. Which is precisely why Whitehouse and Lieu and others like them are seeking to stifle questioning of their dogmas. If the science is right, it will stand up to questions.

It has not been necessary to pass a resolution criminalizing the suggestion that the Earth isn’t round. Why is it necessary — if the “science” is “settled” — to criminalize disbelief in or questioning of the assertion that human activity is causing the climate to warm up?

Perhaps because there is evidence to the contrary. Such as an increase in polar ice. As well as shaky “science” — like the fact that many of the temperature recordings used to buttress the assertion that the surface of the Earth is heating up due to man’s fossil fuel-burning ways were (and still are) taken in cities and other paved-over areas that are not representative of condition generally and so fundamentally dishonest.

Or the fact that “inconvenient truths” — data that do not support the theory — is dismissed. And the fact that many touters of “climate change” theory — for example, Bill Nye the “Science Guy” — have no academic credentials in the field. Nye has a degree in mechanical engineering, not climatology or meteorology. He is by no means unusual. A large number of the signers of U.N. Resolutions and so on asserting the fact (as they insist) of “climate change” lack academic standing to make such claims.

Theirs is political science.

It is interesting to note that the term, “climate change” came into vogue after the PR failure of (first) global cooling and then — when that became awkward — “global warming.” Some of you may recall when we were pelted with dire warnings about an imminent Ice Age — caused by … yup, man’s activities. Then it got uncomfortably warm — uncomfortably warm, politically. Too many hot summers and too many mild winters.

And so we began to hear about global warming.

That, too, became problematic. A number of unusually hard winters got people doubting and — yea! — “denying.”

Enter “climate change” — a wonderful term because no matter what the climate does, it always fits.

That kind of editorial shuck and jive also ought to arouse suspicion, too. Or at least raise some legitimate questions.

But even if “climate change” turns out to be true — that is, even if it is true that human activity (as opposed to natural cyclical fluctuations) is causing the climate to warm — should it be against the law to refuse to accept this? To voice — or publish — a contrary opinion?

Down that road lies something that’s not America — and it’s despicable that American lawmakers are the ones stepping on the accelerator.

What made America not Soviet Russia or some other such place was the freedom to not embrace orthodoxies — to believe whatever you wished to believe. To say so, openly. To publish and speak without fear of being punished for disagreeing.

Whitehouse and Lieu — who are politicians, not scientists — are threatening to alter that. And if they are successful, it will not stop with enforcing their preferred orthodoxies in just this one case. If they succeed, they — or others of like mind — will impose new orthodoxies.

We cannot cross this Rubicon and still call this place America.