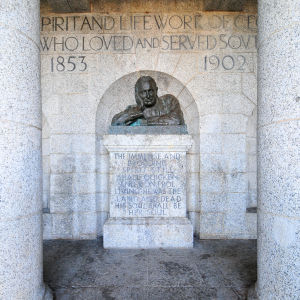 Messing with history is not a cool thing to do. But there is a lot of it going on; particularly, pulling down monuments, or going after other people’s religious statues. This kind of heresy goes from the grotesque to the downright evil.

Topping my list of the grotesque is Nkotozo Qwabe, a young South African now studying as a Rhodes Scholar, who leads a movement to pull down the statue of Cecil John Rhodes at Oxford and, among other things, to ban the French flag from the campus. Compatriots of this ingrate have already removed a statue of Rhodes at South Africa’s University of Cape Town.

On the evil side is ISIS, and its continuing destruction of antiquities in Iraq and Syria — most recently, the monumental ruins of the ancient city of Palmyra in the Syria. With it, as with their razing of Nineveh, Nimrud and other archaeological sites, ISIS has turned to dust the whole heritage of the world: a cultural heritage and artifacts so precious that they rise above religion.

ISIS and the anti-Rhodes activists are trying to adjust history to passing present values. Knocking down an ancient temple or a statue is, in its way, book burning. It is destroying the record in order to distort the record.

Universities, here and abroad, are vulnerable to the demands of minority groups. Oxford has already removed one Rhodes plaque. At Princeton, students are demanding that Woodrow Wilson’s name be expunged for his support, as they see it, of white supremacy.

Decent people and institutions accede to the inane and foolish wants of minorities to appear reasonable to the unreasonable. Princeton has already gone some way down that slippery slope.

At Oxford, Qwabe is not content with just demonizing Rhodes. He has denounced the French for their colonial and current activities, and compared the French flag to the Nazi flag. And he has criticized Oxford University for being Eurocentric. Why would it be anything else? Founded in 1096, it is the second-oldest European university.

Qwabe would have us, and the people of Africa, believe that Rhodes was a villain of unspeakable proportions, practicing racism and genocide. In reality, by today’s standards, he did some bad things and some very good ones, which include funding Qwabe’s attendance at Oxford.

Qwabe’s history is about as shaky as his gratitude. Rhodes was a controversial figure who believed absolutely in British exceptionalism as epitomized in the British Empire. He went to South Africa from England for his health and made a fortune in diamond mining. He entered politics, where he became prime minister of Cape Colony, on the tip of South Africa. There he seemed very enlightened, establishing a franchise that was open — as open as any at the time — and was not to be matched in South Africa until the fall of apartheid.

Where Rhodes’ dealings get murky is when he financed the push into what is now Zimbabwe. Rhodes defrauded the king of the Matabele, Lobengula, in the south of the country, but saved the Shona tribe, in the east and central region, from certain extinction at the hands of the Matabele, a newly arrived offshoot of the Zulus in South Africa who conquered lesser tribes, killed the men and boys, and forced the women into polygamous marriages.

Another good thing that Rhodes did was to cut off a chunk of South Africa, then known as Bechuanaland, now Botswana, from control by the Afrikaner Boers in 1895.

Rhodes did some reprehensible things but he believed in the public good as he saw it — that being a manifestation of the British way of life, justice and values. Obliterating Rhodes’ historical role, and the few statues that point to it, is to meddle with the truth.

This same poison is at work on U.S. campuses, where student radicals bar speakers they disagree with from appearing. Punishing the memory of the great figures of history because they fail the social acceptability tests of the present is a disturbing part of the current academic scene, where free speech is under attack and free ideas are doctored to fit the values and prejudices of the moment.

There is a linkage between the thinking that is destroying the precious monuments of pre-Islamic civilization and punishing the memory of Rhodes and Wilson. The difference is only in degree.