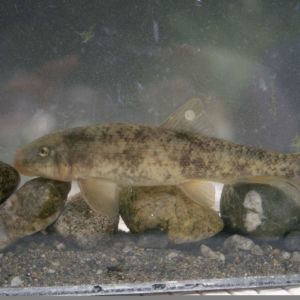 Over the past five years, California slowly wilted, then parched and crisped. The state went through a period of severe drought, which hurt the state’s agricultural industry and necessitated harsh cutbacks in residential water use. At last, rain has come. Gov. Jerry Brown announced on Friday that the state of emergency was officially over. The drought might officially have ended, but groundwater stores remain depleted. In the face of this, several environmentalist groups have filed a lawsuit against the city of San Bernardino Municipal Water Department and the city of San Bernardino, arguing that a new water management plan will hurt the endangered Santa Ana sucker, a small fish.

The Center for Biological Diversity and the San Bernardino Valley Audubon Society filed suit in San Bernardino Superior Court to stop a proposed water diversion plan in order to protect the Santa Ana sucker and several other specifies of California fish. Under the plan proposed by the San Barnardino Municipal Water Department, the city would send water from its Rapid Infiltration and Extraction (RIX) Facility to spreading basins rather than discharging the treated water into the Santa Ana river.

“This project is a bad deal for people and wildlife alike,” said Drew Feldmann, conservation chair of the San Bernardino Valley Audubon Society. “At a time when the city’s emerging from bankruptcy, it should not be wasting limited resources on this expensive project that will starve our river of water and wreck its riparian ecosystems. The people of San Bernardino should not have to choose between a healthy river and adequate water supplies.”

The Audubon Society and the Center for Biological Diversity allege that the water discharged by the city is essential to preserving the habitat of the Santa Ana sucker and other local wildlife. The proposed plan would divert up to 22 million gallons of water per day into the RIX facility and the spreading basins. In their complaint, the environmentalists argued that this had the potential to cut the flow rates of the Santa Ana river in half. The lawsuit came after the water department voted to approval an Environmental Impact Statement that, according to the environmentalists, failed to identify impacts to endangered species.

After voting to approve the new water treatment plant in March, city officials are now pushing back on environmentalists’ claims, arguing that the city should not be asked to bear all the costs of protecting the Santa Ana sucker.

“Despite the fact that we have done everything demanded of us from the U.S. Fish and Wildlife Service, at the cost of over $5 million, they have decided that San Bernardino, an economically disadvantaged community, must alone bear the costs of the fish,” said Stacey Aldstadt, general manager of the San Bernardino Water Department to the San Bernadino County Sun.

Beyond just the cost issue, the plan proposed by San Bernardino helps to restore its groundwater supplies rather than shipping the million of gallons downstream, an important concern in the aftermath of the drought.

While water tables around the state were effected by the recent drought, San Bernardino was particularly hard hit. In 2014, officials said that the water table in the San Bernardino basin was at its lowest level in recorded history. At the time, cutbacks in water deliveries from other parts of the state were limiting the water district’s ability to recharge the basin and administrators spoke of the need to continue to store up water during wet periods to replenish supplies.

Over the course of the state’s history, water rights have been a contentious subject in California and water management today is subject to strict regulation. Water in the state is a complicated subject. Various state departments and water boards manage different regions of the state, while attempting to balance the competing demands of both upstream and downstream communities, as well as the different interests of the agricultural industry, urban development, recreation, and environmental concerns.

In addition, other government groups handle floodwater and irrigation. California’s increasing population has increased the strain on its groundwater supplies, making replenishing depleted water tables a priority. At the same time, increased water use has resulted in lower populations of freshwater fish. A report from the Public Policy Institute of California in 2011 found that only 22 percent of California native fish species were considered “reasonably secure” in 2010, down from 44 percent in 1989.