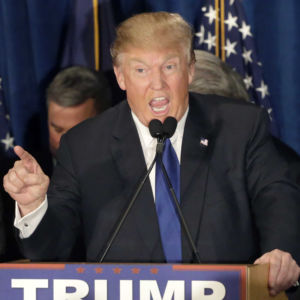 Republican presidential front-runner Donald Trump continues to lambaste what he sees as the corrupt influence of money in politics. But many campaign finance reform advocates, including conservatives, are ambivalent about his rhetoric that’s short on solutions to systemic problems.

Rallying Wednesday night at Clemson University in Pendleton, South Carolina, Trump said super PACs pouring money into the White House race are “crooked as hell” and “out of control.”

“I’m self-funding my campaign, so I can’t be bought,” the billionaire business mogul told the crowd.

In truth, nearly 34 percent of Trump’s campaign funding by the end of last year came from contributions, according to the fact-checking website PolitiFact. But the mogul did finance a whopping 66 percent of his effort, touting his avoidance of “special interest money” in his New Hampshire primary victory speech Tuesday.

“These are special interests, folks. These are lobbyists. These are people that don’t necessarily love our country. They don’t have the best interests of our country at heart,” Trump said. “When you see the kind of deals made in our country, they’re made for their benefit. We have to stop it. For your benefit, we’re going to make the deals for the American people.”

This pitch — that Americans should elect the independently wealthy Trump who isn’t beholden to political donors — doesn’t sit well with many campaign finance reform advocates. Larry Noble, the general counsel at the Campaign Legal Center, noted that Trump hasn’t proposed any specific changes to the current system. He’s worried about how the mogul wants billionaires like investor Carl Icahn to be his advisers and appointees in the White House.

Another advocate with concerns was University of Minnesota law professor Richard Painter, who penned “The Conservative Case for Campaign-Finance Reform” in the New York Times last week. In an email to InsideSources, he said “there is nothing fair about a system where the only candidates who are not dependent upon special interest money are self-funded billionaires. That is not the system of representative democracy contemplated by our founders.”

Painter, who was an associate White House counsel for ethics under President George W. Bush, added that the country “is in a precarious situation when angry voters respond to apparent dysfunction and disenfranchisement by rejecting mainstream candidates and gravitating to extremes.”

“We need to fix our campaign finance system,” he said, “but in the meantime voters in both parties need to make responsible choices with what we have. Mr. Trump is not one of those choices.”

Despite their criticisms, however, Noble and Painter agreed that Trump is tapping into frustration with money in politics as a growing bipartisan concern. “Whether you are a conservative Republican who believes in fiscal responsibility and doesn’t believe in corporate welfare or whether you are a progressive who believes in universal healthcare, you are becoming aware that the problems stem from influence of large contributors,” Noble said.

That’s certainly the assumption of Take Back Our Republic, a right-leaning campaign finance reform group launched in January by conservative political consultant John Pudner. He told InsideSources that money and politics has “moved to a top-of-mind voting issue, which it had never been until very recently.”

In fact, many Republicans have avoided the topic all together, rejecting reform as a First Amendment violation of political speech through spending. Pudner said that will change, and “you’re already seeing the beginnings of the crack in the dam.”

In New Hampshire’s closely watched Senate race, the Republican incumbent is calling on her Democratic challenger to sign a pledge limiting outside spending in their campaign. According to WMUR, Sen. Kelly Ayotte wants Gov. Maggie Hassan to agree “that a candidate who benefits from a third party ad donate 50 percent of the ad’s total cost to a charity of the other candidate’s choice.”

This pledge was used previously by former Massachusetts Sen. Scott Brown, a Republican ally of Ayotte’s who ran for Senate in New Hampshire unsuccessfully in 2014.