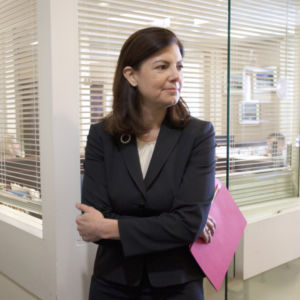 When you think of politicians courting Millennial voters, you think of Democratic presidential nominee Hillary Clinton sitting down with comedy actor Zach Galifianakis for a funny, yet awkward interview on his show.

But Senate candidates in tough elections across the country are also trying to tap into this voting bloc to beat their opponents.

In the New Hampshire Senate race, Gov. Maggie Hassan and Sen. Kelly Ayotte are pushing to get Millennials involved in this election.

Hassan, the Democratic candidate, held a rally in September at the University of New Hampshire with Sen. Elizabeth Warren, D-Mass., to talk about progressive issues and why Republican presidential nominee Donald Trump should not be in the White House.

After the rally, the two women went over to the Dairy Bar, an ice cream shop on campus, to talk with the college students one-on-one in a more informal setting. But it’s not just Democrats that are looking for their vote. Some Republicans, including Ayotte, are working to include them more in their campaigns.

For the presidential debate, Ayotte went to a viewing party with the UNH College Republicans on Sunday night.

Her campaign has also given out free condoms on the campus to publicize her plan on getting over-the-counter birth control legislation passed.

“When we see the trend of 18- to 24-year-olds having higher contact with campaigns, it usually means a higher turnout at the polls,” said Abby Kiesa, director of impact at The Center for Information and Research on Civic Learning and Engagement.

“We see that with [President Barack] Obama getting more involved in campaigns and Bernie Sanders, and Sen. Ayotte is doing a similar thing which bodes well for her outreach efforts,” she told NH Journal.

Young people in the Granite State are expected to heavily influence the election because the race itself is very competitive, there has been high turnout in the past three election cycles in the state, the New Hampshire primary predisposes young people to candidates descending upon the state encouraging them to vote and there is same-day registration which includes more young people in the process, Kiesa said.

CIRCLE found that 21 percent of eligible voters are under the age of 30 in New Hampshire and average youth voter turnout in the Granite State for the past three presidential election cycles was about 59 percent.

Since the Millennial generation now ties the Baby Boomers as a significant voting bloc, campaigns are trying to figure out how to appeal to these new voters.

Clinton is focusing on college affordability and student debt when she visits universities. That was the subject of one of her speeches at UNH in September with Sanders, her primary rival.

Trump and his campaign have focused little attention on a young-voter strategy, instead opting for big rallies in arenas.

“While the big rallies are significant in that they they create a culture and a buzz, it’s some of these more relational things that give young people some eye into what this candidate cares about,” Kiesa said, mentioning Clinton’s interview with Galifianakis on his show “Between Two Ferns.”

No one knows the power of Millennials better than Obama, who won the White House in 2008 and 2012 with more than 60 percent of their critical support.

“The 2008 election was a huge wake up call for campaigns to really reach out to the youth vote,” Kiesa said. “That continued in 2012 and sent a huge message that if you contact young people, they will turn out.”

Republicans have historically struggled on reaching the Millennial generation, since they tend to be more liberal. But after Mitt Romney’s bruising defeat in 2012, the Republican Party published an autopsy report about what they needed to improve upon for the 2014 midterms and 2016 election, and attracting young voters was a key demographic for them. The Republican National Committee has been widely criticized for ignoring the lessons gleaned from that report as it pertains to young people and minorities.

But top Senate campaigns have taken the insights to heart. Ayotte’s campaign released an ad last week showing the Republican senator chatting and tailgating with students at the UNH Homecoming football game.

In the Arizona Senate race between Republican John McCain and Democrat Ann Kirkpatrick, the McCain camp uses Snapchat to target areas where his challenger will be and set up a GeoFilter to digitally advertise “Vote McCain!”

Even outside groups are starting to target young people with funny or cute political ads. In the Pennsylvania Senate race between Republican Pat Toomey and Democrat Katie McGinty, the U.S. Chamber Action group released an ad that says voting for McGinty would be like choosing to eat a live-hamster sandwich.

Whether the GOP can successfully persuade and turn out young voters won’t be clear until Election Day.