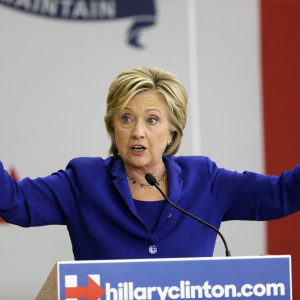 That’s a question the Democratic presidential front-runner will need to answer in this election, and it’s one that underlies the increased progressive pressure she’s expected to feel Saturday in Iowa during her second primary debate with Sen. Bernie Sanders of Vermont and former Gov. Martin O’Malley of Maryland.

Sanders reportedly spent the past two days hunkered down in Burlington, participating in mock debates and prepping “specific policy contrasts to unleash against” Clinton. Meanwhile, O’Malley has the most to prove. Last in the polls and lacking Sanders’ grass roots following, he needs to demonstrate that he’s even a credible contender.

With both men expected to come at Clinton from the left, progressive activists are hoping the former secretary of State will stake out new liberal ground this weekend. On some issues, they see her current stances as a bit too timid.

“Hillary Clinton is still proposing solutions to social problems that impact a narrow segment of the population rather than universal solutions,” said Progressive Change Campaign Committee co-founder Stephanie Taylor on a call with reporters Friday. Taylor wants Clinton to commit to expanding Social Security, breaking up “too big to fail” banks, and passing new financial regulation akin to the 1933 Glass-Steagall Act.

“Right now millions of people are starting to tune into the election. The presidential debate is a huge platform to show voters that the party is for this big, inspiring, bread-and-butter ideas that will make meaningful change in people’s lives,” she said.

Another activist on Friday’s call, Democracy for America Executive Director Charles Chamberlain, credited the liberal “[Elizabeth] Warren Wing” of the Democratic Party with shaping the debate so far in primary. Yet he made clear that the left is far from satisfied.

“While we’ve heard great things from Democrats on confronting mass incarceration, banning the box, and improving the economics lives of people of color, Americans haven’t heard enough about what these candidates are willing to do to address police brutality,” Chamberlain said. “Truly committing to the fight for black lives requires the candidates to explain how we’re going to consistently hold police accountable when they commit a crime.”