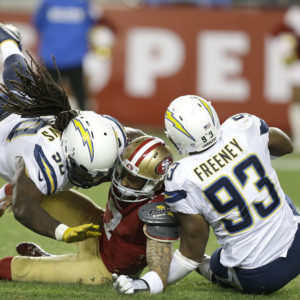 Can NFL Owners Discipline Players Who Disrespect the Flag and the Military?

Posted to Politics January 29, 2018 by Arthur Rizer and Dennis McGlothin

Super Bowl LII will take place Sunday when the New England Patriots and Philadelphia Eagles will battle to determine who is the greatest football team of 2017. Naturally, this means it’s the perfect time to talk about the First Amendment of the U.S. Constitution.

And of course, one cannot talk about the NFL and the First Amendment without talking about Colin Kaepernick and his crusade against police violence — and more specifically, whether the NFL or its owners can discipline him or other players who refuse to stand for our national anthem.

For better or for worse, the truth of the matter in this case is that the First Amendment protects even speech that is insolent and disrespectful. Kaepernick may very well be a man who has made millions under the blanket of freedom provided, in part, by members of the military. And he may also be wrong in his failure to view his protest as disrespectful of their service and sacrifice. Indeed, the flag and the anthem do represent our military and our way of life.

But, of equal importance, they also represent the protection of our freedom of expression. The true beauty of America is our willingness to embrace that freedom. And, it means that our sisters and brothers in uniform protect our electoral freedom, the freedom to make our own way in life, and yes, even our freedom to do and say disrespectful things. The First Amendment must be protected in its entirety — picking and choosing which parts to protect is not an option.

This more general debate has now extended specifically to NFL owners, and whether their decisions to boycott Kaepernick’s hiring or to discipline other players who refuse to stand for the anthem violate the First Amendment. In most private employment situations, the answer would be no. Despite having a right to freedom of expression, our Constitution only protects individuals from government interference. It does not protect us from private interference from a fellow citizen or company (although there are some civil remedies for that). Yet, the NFL and its owners may not be an ordinary, private employer.

Back in the 1960s, our country actually had two different professional football leagues. During that decade, the two leagues decided to merge into one. Back then, opponents of the merger argued that it would create a monopoly, and the U.S. Congress had to step in and pass special laws that exempted it from federal antitrust laws to create the National Football League we know and enjoy today. At that time, Congress also gave the NFL a special tax-exempt status.

Twenty years later the USFL, an upstart league that avoided conflict with the NFL initially by playing in its off-season, began butting heads with the NFL. At that time, as an owner of the USFL’s New Jersey Generals, Donald Trump led the USFL’s lawsuit against the NFL in which it charged the organization with abuse of its monopoly power. The jury in that case found the NFL was, in fact, a monopoly, but awarded the USFL only $1 in damages. Thus, in essence, today’s NFL is not only a monopoly, but a government-sanctioned one.

Ironically, now that Donald Trump has become president, his influence on Twitter merely increases the likelihood that the NFL and its owners could be violating the players’ freedom of expression if they require all players to stand. This is because it can be seen as government pressure to restrict speech delivered from the president’s bully pulpit. There is also no alternative public forum for players to express their views to millions of people who watch NFL football games on television.

There are also state constitutions and laws that are broader than the U.S. Constitution. These states treat free expression as an affirmative right that cannot be interfered with by private individuals. Other states have specific employment laws that prohibit employers from disciplining employees for exercising their rights of free expression. Further, because NFL games are played all over the country, it is personally risky for NFL owners to discipline players who do not stand for the national anthem, as they may violate a particular state’s prohibition on private individuals infringing upon freedom of expression.

Put simply, thanks to the NFL’s government-sanctioned monopoly status, in this case the league and its owners are quasi-government agents. As a result, they will not require their players to stand for our national anthem. And thus, while Colin Kaepernick certainly should not be named GQ’s citizen of the year, it is equally true that he should not be the public pariah he has become for exercising his constitutionally guaranteed rights.

Arthur Rizer is director of criminal justice and security policy at the R Street Institute. He is a retired officer from the U.S. Army WVNG. Dennis McGlothin is an adjunct professor of law at Seattle University and a practicing civil litigator in Washington and Florida.