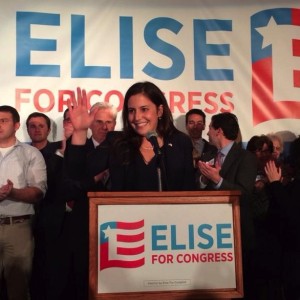 Rep. Elise Stefanik, R-NY, is a Millennial conservative and the youngest woman elected to Congress.

Can Republicans Ever Win Over Millennial Voters?

Clad in a Western Kentucky University jersey for the evening’s Congressional Baseball Game, the Bluegrass State senator and Republican presidential candidate is drawing an analogy to the 1961 science fiction story “Harrison Bergeron,” which only one student at the College Republicans event claims to have read.

“The story of Harrison Bergeron is the story of a dystopian future,” Paul begins, relaying Vonnegut’s vision of a government that enforces equality by physically crippling high achievers.

“If you were fast, they weighted you down. If you were a musician and you were great at music, they played loud music in your ear. … Everybody was made equal. Everybody was brought down to the same level.”

It doesn’t take long to see where this is going. The suggestion is that Vonnegut’s villains aren’t so different from today’s Democrats, who constrain individual success through taxation and regulation while pursuing collective goals like a more equal distribution of wealth. That approach is anathema to a libertarian like Paul, who almost always believes less government helps more people.

It’s unlikely that your average Republican will be quoting Vonnegut on the campaign trail leading up to 2016. For one thing, the author’s work is filled with anti-war themes that only liberals and libertarians could love. Plus, Paul has an unusual fondness for quirky analogies, including comparing the GOP’s troubled political brand to unpopular Domino’s Pizza crust.

But the senator isn’t the only Republican experimenting with new ways to connect with young voters — a segment of the electorate that went overwhelmingly for Barack Obama in the last two presidential elections.

At City Tap House, the college students also hear from Elise Stefanik, a 30-year-old Republican from upstate New York who is now the youngest congresswoman ever elected. Unlike Paul, Stefanik doesn’t come from the anti-establishment, libertarian wing of her party; she worked in George W. Bush’s White House. Yet the Wall Street Journal calls her “part of a broader push by the Republican Party to put forth more candidates who have greater appeal to women and younger voters.” The paper notes that she “describes herself as ‘independent-minded’ and a ‘big-tent’ Republican — the kind she says can help a party looking to boost its standing with voters who traditionally don’t support the party.”

“Millennials are known for being bipartisan,” Stefanik says. “We want to solve problems together.”

The congresswoman adds that “it’s really important that you look for where the commonalities are.” For example, she talks about avoiding over-regulation of app-based businesses like Uber, which are especially popular with young Americans.

This topic comes up frequently among young conservative activists, including at a Heritage Foundation panel discussion last week. Whether it’s Facebook, Airbnb or Spotify, Millennials on the right love to tout the most celebrated companies founded by members of their generation. They argue that these “disruptive” businesses demonstrate how fewer government rules can allow innovation to flourish. The Heritage panelists also pointed to existing regulations they view as hurting young people, such as the Labor Department’s crackdown on unpaid internships.

For his part, Paul has prioritized several other issues he thinks will resonate with “the Facebook generation.” He advocates for privacy rights and pushes criminal justice reform as part of his outreach to the black community.

But conservatives will undoubtedly face several challenges as they seek to attract young voters. To begin with, the Republican Party’s opposition to gay marriage is out of step with the overwhelming majority of Millennials, many of whom consider gay rights a threshold issue when weighing their votes.

In addition, young people may realize that many Democratic elected officials have been quite friendly to the innovative companies conservatives tout. That’s particularly true in Washington, D.C., where Uber and its competitor Lyft have basically gotten the regulations they wanted. Democrats have also shown some willingness to embrace school choice, another issue young conservatives are quick to stress. Then there’s the fact that support for bigger government is highest among Millennials, according to the Pew Research Center.

One cause for conservative optimism is a 2014 survey by the libertarian Reason Foundation, which calls Millennials “the politically unclaimed generation.” The survey finds young Americans to be less partisan that their elders, dubbing them “social liberals and fiscal centrists with the potential to become more fiscally conservative as they age.” Another major takeaway is that Millennials don’t have firm partisan alliances, despite their record of Democratic voting.

These results are by no means a guarantee of future GOP successes. But they are enough to give Republicans the same thing Barack Obama gave young people in 2008: a reason to hope.