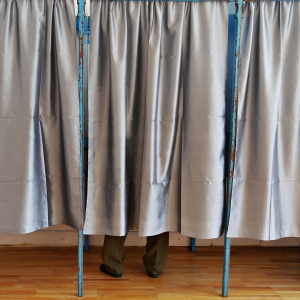 Can We Trust Voters to Make Informed Decisions?

Counting down the days to this year’s midterms, we implicitly trust voters are prepared to make an informed decision at the ballot box. But is this faith well-founded?

Late-night TV offers a disconcerting glimpse at our collective political knowledge. When Joe Biden recently visited Los Angeles for a series of fundraisers, comedian Jimmy Kimmel sent a camera crew onto Hollywood Boulevard to ask: “Who is Joe Biden?” Kimmel didn’t have much trouble finding American citizens who were clueless. Jay Leno posed a similar question for his Jay Walking segment late last year to the same effect.

While we can hope those who don’t know the name of the Vice President are outliers on tests of political knowledge, a new survey released last month shows they are not alone in needing remedial civics lessons. The study, conducted by the Annenberg Public Policy Center of the University of Pennsylvania, found that more than one third of respondents could not name a single branch of government. And it must be very difficult for voters to decide which party is most deserving of their support (or ire) considering most Americans don’t know which party controls either the House or the Senate.

With these results in mind, just imagine how little voters know about economic policy, the minimum wage, immigration reform, healthcare, and terrorism. Or witness the media-hyped hysteria over ebola, which experts agree is unfounded. These are the issues being considered by voters as they enter their polling place, but the knowledge base is very low.

Shouldn’t voters want to know more about the politicians and policies they support or oppose?

Ilya Somin, a Professor at George Mason University School of Law and the author of Democracy and Political Ignorance: Why Smaller Government Is Smarter, explains that voter ignorance is rational because the chance that an individual voter impacts the election is very small. Rather than a voter spending his or her time studying the candidates, it makes sense to do something either more profitable or fun.

There are some who acquire political knowledge because they enjoy politics and tracking their favorite issues. It’s similar to football fans who cite statistics about the game. But when people act as political fans, explains Somin, they tend to be highly biased in the information they pursue.

Just as sports fans allow their emotions to overcome rational analysis of a penalty against their team, political fans overvalue information that supports their preexisting views. Even when receiving unbiased information, it too is often evaluated incorrectly because of partisanship. One recent study showed that among mathematically-skilled participants, the wrong conclusion was often drawn if data presented disagreed with their personal views.

Voters identify shortcuts to political knowledge. One of these is retrospective voting. This is why it has proven a potent message to ask voters, “Are you better off today than you were four years ago?” But while this question is useful for politicians, voters’ cognitive biases get in the way of an accurate answer. Research shows that when a Democrat is in the White House, Republicans tend to overestimate the rate of inflation and unemployment. Democrats underestimate. And vice versa.

Some base their vote on short-term fluctuations that can be out of a politician’s control. Studies have shown that a drought in a farm state could lead to the ouster of an incumbent, while a sports team championship improves the chances that a mayor is reelected.

To some extent, voters can rely on their alignment with a political party to know how they would likely vote if they fully researched the issues. Somin points out, however, that voters tend to base these views on the intended result, but widespread ignorance of basic economics means that voters probably can’t evaluate whether their party’s policies can deliver.

To make matters worse, voters have it tougher today than previous generations. The growth of the regulatory state and technocratic nature of government mean that political knowledge is more specialized.

The case is also strengthened for limited federal government. People spend more time researching what TV or car to buy than how to vote. In deciding where to live, they conduct extensive, unbiased research into the local community and its policies. Voters can choose to “vote with their feet” and live in a community aligned with their values.

Voters don’t always get it right, and unfortunately, the complexity of modern government exacerbates this problem. Voter ignorance is a troubling quirk of democracy. But our founders knew these pitfalls, and they designed a republic that still stands over 200 years later.