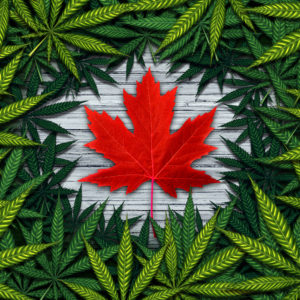 Canada Has Gone to Pot; Demand Is High, Supply Is Low

TORONTO — The doorway behind the front counter of Cafe 66 conjured images from black-and-white movies of a speakeasy during Prohibition in the United States when alcohol was banned by constitutional amendment. Before another amendment had to be adopted overturning the ban, gangsters hefting submachine guns shot it out with J. Edgar Hoover’s G-men — FBI agents — trying to stop truckloads of booze coming in from Canada.

“Please knock before entering,” said the sign scrawled above the door. Rapping gently, tentatively pushing the panels open, I was greeted by displays bearing images of sticks of marijuana with exotic names like “Mango Pie,” “Thin Mint GSC,” “Duke Nukem,” “Yukon Gold” and “Green Lantern,” to name a few. Notes helpfully suggested differences in flavor and strength — “mellow” was a recurrent theme.

In fact, I might have copied down more names but for a wary young man behind the counter. “What are you writing,” he asked. Not impressed when I told him I didn’t want to forget those colorful names, he asked me to please stop. When I identified myself as a journalist, he said he had nothing to say.

Right, it’s now legal for those 19 and above to smoke, whiff, chew or grow cannabis anywhere in Canada. The catch is, here in Toronto and the rest of Ontario Province, home to one-third of Canada’s 37 million people, you have to order it online through the official Ontario Cannabis Store. While the rules vary from province to province, it’s technically illegal to buy it over the counter in all Ontario.

How then could this tiny shop, known for selling marijuana long before it was formally legalized last month, sell it so openly? “By the grace of God,” the young man responded as customers were lining up. “Don’t worry.” When I paused at the display of cannabis-laced cakes and cookies, he begged, “Please hurry.”

Reluctantly, I took the hint.

So enthusiastic are Canadians about their newly won freedom to smoke pot that the online service for Ontario has just about run out. Orders go unfilled for weeks, packets arrive way late, and dealers, legal and illegal, thrive regardless of whether they are within the letter of the varying laws of Canada’s 10 provinces and three territories.

So erratic and inconsistent are the policies from province to province that it’s likely to take years for the folks who govern the country from the capital of Ottawa to synchronize all the rules and regs. At Cafe 66, I purchased one joint for $12 — total $14 after the guy tacked on $2 for the plastic envelope in which it was wrapped. Taking no chances, a note in small letters on the front stated it was for “medicinal purposes only.”  Right.

Not everyone is so willing to wink at the law. Another place that came recommended had the appropriate name, Best Buds. I was sure they too would be stocked with cannabis, but the place was tight shut. Through wide plate glass windows, I saw only empty shelves.

While I was knocking to be sure no one was lurking inside, willing to sell buds surreptitiously, three or four people joined me, all prospective customers. “Aren’t they open,” one asked plaintively, hurrying up with high expectations. “What’s going on?”

A day or two earlier, I had gotten a whiff of the sensitivities as I waited at the Niagara Falls entry while a Canadian immigration official asked a lot of questions about why I was visiting his country. He wanted to know about my relationship with my host — old friend from Vietnam War days — how long I would stay, how often I’d been in the country.

When I told him I was a journalist, he asked what I’d be writing about. I’m not sure I had to answer all those questions, but I’d read in the paper in Buffalo, the nearest big U.S. city to this particular crossing, about people arrested with a stash in their car — the first I’d known about the legalization of marijuana in Canada.

For sure, when my friend invited me to his great place for an exchange of old war stories, I hadn’t been thinking of reporting on marijuana. Just to keep the immigration guy happy, I said I might write about the trade dispute between Canada’s prime minister, Justin Trudeau, and President Donald Trump — surely a safe topic.

Holding on to my passport, the guy shut down his window before checking on a computer for a long minute. After he returned my passport and told me I was free to enter, I asked what he’d been looking up. “You can go,” he said. When I repeated the question, he ordered, “Go.”

So I guess relations between the United States and Canada are not the greatest these days while Trump complains about trade issues that have nothing to do with the illicit import of Canadian cannabis. No, I wouldn’t consider returning to the United States with joints in my car. The news on Canadian TV quoted U.S. immigration officials and New York state troopers saying anyone caught with the stuff at the border would lose their entire stash and face prosecution.

But wait. Will the Canadian experience set a precedent for the U.S. – and other countries where pot remains illegal? U.S. attitudes toward marijuana vary widely even if it’s allowed in many places for medicinal and even recreational purposes. In the midterm elections,  voters made Missouri and Utah the 31 and 32 states to go thumbs-up for marijuana as medicine, while voters made Michigan, so  close to Canada, the tenth state to say “OK” for recreation, too.

Canadians seem to have rather mixed feelings. Yes, any adult can get it, online or over-the-counter. No, don’t get high while driving — the penalties there are if anything more stringent than for drinking while drunk on alcohol.

As for the joint that I had purchased at Cafe 66, I didn’t light up. Having heard — and written — a lot about drugs among U.S. troops in Vietnam all those years ago, I don’t touch the stuff. Before bidding a fond farewell, I gave the joint to my friend, who let me know I’d been overcharged. Seems the going price on the open black market, pre-legalization, was $6.