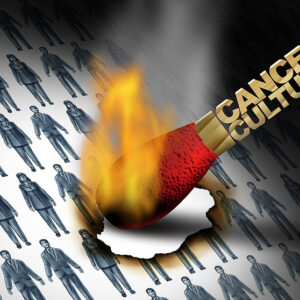 Religion and politics are never polite subjects to discuss in mixed company. But imagine if what most people consider to be merely a social faux pas became the reason you were fired from your job, sued, or had all of your personal information spread publicly on the internet. Smply because someone at the table disagreed with who you voted for.

For most of American history, this response would be unfathomable.

But it happens every day.

Journalists and editors get fired for printing differing opinions—even if they don’t agree with that opinion themselves. Small business owners get sued or fined for following their conscience. Workers get fired for social media posts from their youth. Not even Abraham Lincoln is safe when the mob is on a warpath.

The danger and destruction of cancel culture is far-reaching and, if we aren’t careful, it could become a defining characteristic of American culture for posterity.

It’s a popular issue with the talking heads on cable news, but the Center for Excellence in Polling wanted to see what a diverse population of the United States thought of “canceling” people for their beliefs.

The results paint a very different picture than the woke elites would have you believe.

Seventy-seven percent of voters are concerned about cancel culture, with 50 percent saying they’re “very concerned.” Republicans and independents report being the most concerned.

A majority of voters believe that Democrats engage in cancel culture more often, and 49 percent of Democrats said they wanted individuals to be held accountable for things they did within the last 10 years or for the rest of their lives—even if it means dismissing beloved pop culture icons like “The Bachelor’s” Chris Harrison.

Despite this, fortunately only a single-digit percentage of all voters believe that releasing personal information, known as ‘doxing,’ should be legal.

The majority of Americans want protections from those who would strip them of the dignity of work and the ability to provide for their families simply for voicing a political opinion. An overwhelming majority of voters agree—no one should fear job loss, or that their home address or personal information will be splashed all over the internet simply because they disagree with an idea popularized by the media.

With poll numbers like these, the left may just be bullying themselves out of popularity, along with the corporations falling over themselves to prostrate themselves before the mob. No American should be afraid to talk to their own family about their deeply held beliefs. People are being bullied for expressing their opinions, even with friends and family. It’s driving a wedge between Americans and keeps our children from learning how to engage in healthy debate.

Every generation has its political issues and disagreements, But cancel culture cannot and should not define us. We owe it to ourselves and to our children to stop this trend before it becomes the norm. As the radical left continues to move the goal post of what’s ‘acceptable’ in public discourse, concerned Americans should continue to stand strong in the face of adversity and defend those who dare to take a stand and speak their mind.

Stefani E. Buhajla is the communications director at the Foundation for Government Accountability. She wrote this for InsideSources.com.