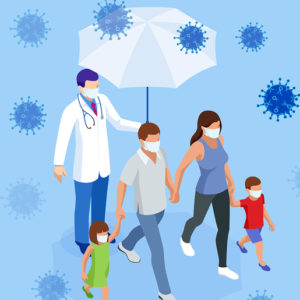 Canceling Coronavirus Is Not Just the Government’s Job

Before you pass judgment on the government’s performance dealing with COVID-19, answer this question: How’s your “go bag?”

In the wake of the September 11 attacks, people were advised to create a survival backpack for their worksites. In case of emergency, you’d have access to a change of clothes, medications, cash, food, water and other items to help you shelter in place or make the long, unexpected journey home.

Do you still have your bag? Did you ever have one? I don’t know many who maintained them. If they had them, the money paid for a happy hour long ago and the snacks were eaten.

How about a flu shot? Did you get one last year?

Flu shots are a good indicator of our collective preparedness. Twice a year, the world’s top viral experts gather to select the three or four strains that shots will combat in coming months. In 2009, H1N1/swine flu — our last pandemic — was not identified until after shots were made. The Centers for Disease Control and Prevention reported that flu during that pandemic caused more than 61 million infections and 12,469 deaths.

But even if H1N1 had been included in the shot, only 41.2 percent of Americans over 6 months old got a shot for the 2009-2010 flu season. To improve access, state governments later eased regulations so pharmacists could give flu shots. That’s why you can get flu shots everywhere these days.

Despite this easier access and promotional campaigns, only 40 percent to 60 percent of Americans are estimated to have gotten shots for the current flu season.

A flu shot will not stop COVID-19, but what the government has done to fight the flu and how the public has responded shows how we must adapt to pandemic culture.

President Trump declared a nationwide state of emergency to try to prevent the spread of the virus. He restricted travel to stop the influx of infected individuals. He convened scientists, healthcare providers and business leaders to find a cure, comfort the sick and stabilize the economy.

In his address to the nation, the president reminded us that “no nation is more prepared or more resilient.” He urged putting politics aside to “unify together as one nation and one family.”

Money was appropriated. But the solution is much more than money.

Like with the flu, regulatory reform is something to rally around. Last year, the Trump administration enacted new rules to reduce paperwork and increase speed and efficiency. New emergency waivers allow hospitals to increase workloads without running afoul of Medicare and Medicaid rules. Restrictions on telehealth options will be lifted. As Dr. Anthony Fauci of the National Institutes of Health said, opportunities increase when we “remove the constraints” to fighting the virus.

It doesn’t need to stop there. Before COVID-19 exploded, the White House proposed reforms to the National Environmental Policy Act — regulation that affects major construction and land-use decisions.

These reforms can also help improve healthcare infrastructure. In China, which is reporting gains against the virus, the government reportedly constructed a 1,000-bed hospital in only 10 days. Conversely, the 2016 opening of the 305-bed Stamford Hospital in Connecticut took 50 months. For quality, China’s facility probably can’t compete with Stamford — but America would also not be able to respond so quickly under NEPA’s mandate.

Also in China, communities most affected by COVID-19 are on lockdown with some residents literally sealed in their homes without regard for civil liberties. That will not and should not happen here. But when considering how to personally respond to COVID-19, Americans would do well to heed the words of another president, John F. Kennedy, who urged Americans to “ask not what your country can do for you — ask what you can do for your country.”

Practice social distancing and self-isolation. Battle through cabin fever and the urge to put yourself potentially in infectious situations like mass gatherings. And be neighborly. If you’re hoarding, spare a roll of toilet paper for the unfortunate in your community. The more conscious we are about preventing the spread of the virus, the faster it can be contained.

This is your opportunity to make up for your neglected go bag or lack of a flu shot.

H1N1 was never eradicated. People still get it, but there’s a vaccine and it’s under control. COVID-19 research is proceeding at breakneck pace with promising leads. The Trump administration is working with businesses like Walgreens and Walmart on testing and containing the virus.

And this, too, shall pass.

David W. Almasi is vice president of the National Center for Public Policy Research, a Washington think tank. He wrote this for InsideSources.com.