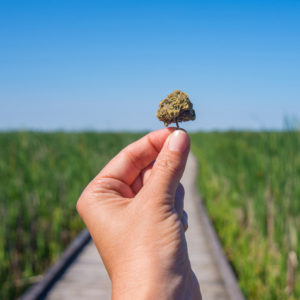 Cannabis Industry Is Uncertain, but Hopeful About Trump Administration

On the morning of November 9, the American political landscape looked quite different than it had the night before. Not only was Donald Trump now the President-elect, but proponents of marijuana legalization had made important gains in California, Massachusetts, Maine, and Nevada, all of which voted to legalize recreational use. The election of Trump, a lifelong teetotaler who tapped pro-prohibition Senator Jeff Sessions for attorney general, is at odds with the broader movement towards relaxation of drug laws. The result is both encouraging and uncertain for the broad range of businesses dealing with cannabis.

As a candidate, Trump gave few hints about his position on legalization. In October 2016, he told reporters that he supported medical marijuana, but believed that full legalization should remain a state issue.

“In terms of marijuana and legalization, I think that should be a state issue, state-by-state,” Trump told reporters in one of his few remarks on the subject.

Trump’s sparse statements have created uncertainty in the cannabis industry in the U.S. Currently, legal cannabis is a $6 billion industry, a number which does not include the tens of millions of dollars spent on medical research into cannabinoids. Were it to be fully legalized, it could grow to a $50 billion industry in as little as 10 years.

Growth on this scale would require a rather loose regulatory environment, which some doubt they will see under Attorney General Sessions.

“Sessions’ nomination has definitely put a scare into both the marijuana reform community and the marijuana industry – at least the small percentage who are politically conscious and aware,” said Ethan Nadelmann, a drug policy expert.

Nadelmann fears that Sessions would take a hard line approach to drug enforcement, perhaps by appointing prosecutors who would aggressively pursue drug convictions. A stricter attorney general could also change policies preventing the Justice Department from going after states which have opted to legalize medical or recreational marijuana.

“My feeling is that Trump is all about jobs and industry,” said Lane. “The cannabis industry could be as big as the wine industry by 2020. That’s a $34 billion industry.”

Lane notes that the Justice Department has few tools and limited resources to devote to drug enforcement, particularly in states which have legalized.

“All Sessions can really do is strengthen the Cole memo,” he said. Drafted by deputy attorney general James Cole in 2013 and reapproved each year afterward, the Cole Memo focused federal resources on preventing the sale of marijuana to minors and preventing proceeds from flowing to illegal gang activity, while allowing states to legalize medical and recreational use as they saw fit.

Despite the encouraging signs, growth in the industry is restricted by several different federal statutes. One of the most pronounced is financing. At present, it is federally illegal for banks to offer loans to companies in the cannabis industry. Instead, cannabis companies must open accounts in banks that are not federally insured, such as community banks and credit unions. The situation forces some companies to deal primarily in cash.

This financial environment slows growth as companies find it difficult to secure the necessary financing to expand.

“That investment flow is slowed because investors are worried that [cannabis] isn’t legal,” said Lane.

While recreational use makes headlines, cannabis is also the center of increasing amounts of medical research. Researchers are looking into using different active ingredients to try to treat everything from bone breaks to epilepsy.

Seth Yakatan is the former CEO and present board member of Kalytera, a company doing research on the medical uses of cannabis. Moving into the pharmaceutical sphere brings a whole new set of regulations to govern the use of cannabis.

“It would appear that this administration is not necessarily going to promote a pro-cannabis agenda,” said Yakatan.

Yakatan explained that while his field worked with the cannabis plant, it has little in common with legalization or even “medical marijuana.”

“You have one three-letter agency that is going to govern [research], and that is the FDA,” he said.

Rather than working with plants, Kalytera focuses on isolating the active ingredients to develop treatments which can be dosed like any other medicine. While it is able to perform research by working around the federal regulations, prohibition does create a degree of stigmatization that impedes research. Full understanding of the plant and its possible uses could take years of study in the sort of open environment that, so far, the U.S. has not had.

“We are in the Mesolithic period in terms of our understanding of cannabis,” says Yakatan. Getting beyond that point would take a large shift in perspective, one that he is loathe to predict.

“As a person who majored in history, cannabis is an interesting question historically [as far as] states’ rights versus federal rights,” he said. “We are close to the number of states where it could become a constitutional question.”

“That’s the precipice,” he said. “I don’t think any administration is going to be proactive.”

If that day is coming or not, he cannot say. However, like Lane, he believes that it is likely that openness towards cannabis use will continue. Although it is early to say, so far at least, the cannabis industry has not seen anything to fear from the new administration.