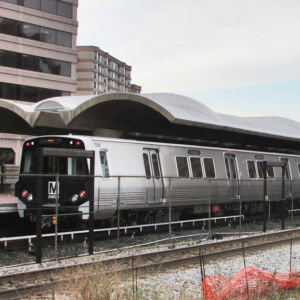 Why Can’t WMATA (Or MTA, or CTA) Make the Trains Run on Time? Well, It’s Hard to Know Where They Are

Consistent punctuality is an essential feature of a well-working commuter rail system. For workers to use the system routinely, they have to have confidence that trains and buses will run on schedule, delivering them to their workplaces on time.

There are different ways of measuring the “biggest” transit systems, including total rides, miles of track, and number of stations or lines. These rearrange the ordering somewhat, but still leave the metro rail systems in New York City, Washington, D.C., Chicago, Boston, and San Francisco as the largest in the country. These systems vary widely in terms of operating hours (Washington and Boston primarily operate as commuter rails, while San Francisco keeps the trains running until 1 am, while Chicago and New York run at least some trains 24/7) and design. Whether the trains operate above or below ground, what they have in common, is age.

All five of the largest rail systems in the U.S. were built during a golden age of urban infrastructure between roughly 1900 and 1970. This means that today, the newest of them, is more than forty years old and the oldest has been in operation for more than a century.

This is the foundational reality that sets American metro rail systems apart from those in many Asian cities. Instead of being able to adopt train tracking technology during the construction phase, American metro rail has had to find ways to work this functionality into pre-existing systems.

In New York, for example, operators know which sections of track have trains on them, but do not have the ability to determine where any specific train is in the system. When the system was constructed, its designers were primarily concerned with safety and preventing two trains from running into each other. As a result, the system was built with an ingenious system of what are called “interlockings.”

These interlockings are a system of signals, switches, and controls set up to disallow an unsafe state, which is to say one in which two trains collide. Early versions of the interlocking system used levers that literally interlocked to prevent trains from moving forward. When a train entered a particular section of track, it would cause switches to flip disabling the sections immediately before and after it.

At the time when systems like New York’s were built, and later renovated, safety systems were constructed mechanically. In the 1970s, New York updated the system to allow for a then-advanced computer simulation of the system. Although this allowed for an operator to see more of how the system was running, it maintained the previous structure of occupied/unoccupied track sections.

“The reason there are no realtime countdown clocks on the F line is that even the tower operators don’t know which train is where,” explains James Somers of the Atlantic. “All they can see is that a certain section is occupied by a certain anonymous hunk of steel.”

This shows the difference between saying that a train is about to arrive versus specifying which train is about to enter the station. For commuters, that is the difference between an arrival notice and the ability to predict accurately how long their trip will take. Today, real time tracking is available on certain New York lines, but has not been introduced for the entire system.

Certain other systems have been able to develop tracking systems. However, most of these sites are relatively new and in certain areas were constructed by third parties who drew on publicly released information to construct more user-friendly apps.

In 2013, Chicago introduced a train tracker system that allowed riders to track their trains along different routes and gave updates as to projected arrival times at different stations. The system was an upgrade of one that had been originally introduced in 2011 with a more limited list of features. The system allows riders to click on one train in particular and see how long it will take them to reach a particular destination if they get on it.

In Boston, a variety of different apps offer tracking information on the train system. This is possible because of open access to tracking data, which programmers then accessed to design their own programs.

Meanwhile, San Francisco’s BART system, one of the most automated urban rail networks, offers some of the best tracking data. This comes as a result of its centralized and automated structure. Ironically, this design increases the maintenance and operation costs of the system, even as it allows for greater understanding of its day to day operation. One of the areas of particular focus for this system has been train detection, which is prone to false positives, which appear on the system controls as ghost trains.

For the city of Washington, frustration over inaccurate arrival time estimates may mask more fundamental structural problems with the system, says Randal O’Toole, a senior fellow at the Cato Institute who focuses on urban infrastructure.

“While I always like to see more data, the real problem in Washington is that no one (other than me and my Cato colleague, Tom Firey) wants to discuss any alternatives to spending $15 billion to $25 billion rehabilitating the Metro system,” O’Toole told InsideSources. “I don’t see publication of on-time data as furthering that discussion. In fact, my impression is that WMATA is making the problems with its system sound as bad as possible in order to get more funds from the states and D.C.”