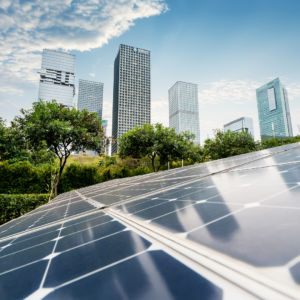 Is going completely carbon free a lofty goal for urban America, or an impossible dream?

Two major U.S. cities, Washington DC in 2017 and Boston last week, have made the pledge to achieve a zero carbon footprint by 2050. While environmentalists are praising the proposals, the plans that the cities have presented show that the goal may be outstripping what is technologically feasible. Becoming entirely zero-carbon will require massive changes to transit infrastructure, utility generation systems, and updates to office buildings, apartment complexes, and single family homes.

Last week, researchers from Boston University’s Institute for Sustainable Energy released a report advising city planners and policy makers on the sort of change the city needs to enact. It is, to put it mildly, drastic.

Eighty-six thousand buildings, both commercial and residential, will need to be retrofitted to improve energy efficiency, including replacing insulation, adding energy-efficient lighting, and switching from oil and gas-powered heating to electric. Private owners would foot the bill for nearly all of this work. The population of Boston will also need to stop driving personal cars in favor of walking, biking, or taking public transportation. The report also pushes for city-wide projects to reduce food waste and promote recycling.

At this juncture, Boston is not discussing how it will mandate these changes–nor guessing how much it will cost.

“This analysis demonstrates that we can reach our goal by 2050, but only through a coordinated and concerted effort among the public and private sectors – and we have to start now,” said John Cleveland, executive director for the Boston Green Ribbon Commission.

Washington, which passed its zero-carbon mandate more than a year ago, is moving slowly. Over the past seven years, Washington has already reduced emissions by 23 percent and was named the world’s first LEED Platinum-certified city in August 2017. The District has started programs to support solar installations in low-income areas and has increased the renewable portfolio standards it requires of utility companies.

Those are the relatively easy first steps. Getting the rest of the way to zero is the real challenge. The city has been soliciting “carbon neutrality strategies,” offering grants of up to $240,000. Pepco, a subsidiary of Exelon and the largest utility in the District, has been pushing back on certain requirements of the law, especially that it must purchase renewable energy under long-term contracts. Exelon owns several nuclear power plants, which provide carbon-free energy, but are not considered “renewable” for the purposes of D.C.’s climate goals. Long-term solar contracts would likely encourage further construction, potentially threatening Exelon’s nuclear plants.

Utilities only came around on the Washington bill after supporters began floating the idea of a carbon tax instead.

This far the fight has centered around electricity generation. Awaiting is the much larger problem problem of making thousands of D.C.’s iconic row houses (most built between 1890 and 1920) energy efficient. As in Boston, historic buildings will need major upgrades, and so far no one knows how to do that. Both cities would also need to reform their transportation infrastructures to push people out of cars and onto buses and trains run on clean energy. Given Washington’s recent metro woes and steadily declining ridership numbers, this is a huge challenge.

Cutting carbon use and emissions is far easier than going completely carbon free. In fact, even when a city can be designed from the ground up, reaching zero-carbon is both difficult and expensive. In 2006, the United Arab Emirates planned to build the world’s first sustainable city. Called Masdar, it would not only be carbon-free, but also waste-free and home to 50,000 residents. The builders spoke of a future of driverless electric cars powered by renewable energy, desalinization plants, and a green future.

By 2016, after sinking an estimated $22 billion and ten years into the city, the project was scrapped. Only five percent the original roughly 2.5 square mile urban area had been completed. Although offices and even university buildings have been completed, they are run by skeleton crews and the city is a shadow of its planners’ dreams.

More explicitly, the project was forced to abandon its foundational net zero goal. Three years ago, Chris Wan, design manager for Masdar City, announced that they were “not going to try to shoehorn renewable energy into the city just to justify a definition created within a boundary.” The project switched goals from zero emissions to 50 percent renewable energy.

Boston and Washington are shooting for a more ambitious goal, without the benefit of massive oil revenues to fund these changes or an autocratic government to force compliance. Based on the available technology, many observers believe that the odds of achieving this carbon-free target are zero.