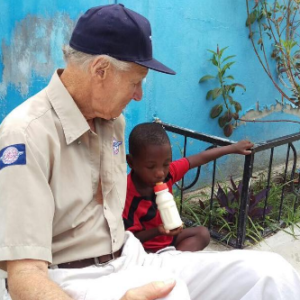 Stan Brock with a young Haitian boy. (via Remote Area Medical)
[IS] Opinions

Care on the Margins — Stan Brock and RAM

Expanding the supply of health care is sometimes as simple as combining a few dollars of resources with a measure of human kindness. Yet often, laws and regulations obstruct the desire to do good. Stan Brock and his organization, Remote Area Medical (RAM), reflect both stories.

In 2015, a colleague suggested I call Brock, who lives in Tennessee. She said he organizes volunteer medical professionals to provide care and thought I would find him interesting. Quite an understatement.

I assumed Brock would be a doctor with a Tennessee accent. Instead, the voice on the phone seemed cinematically British — the sort one might hear alongside Alec Guinness in a World War II film. When I Googled him afterward, his face was precisely the picture my mind had conjured up during our conversation — craggy, charismatic and animated beyond his then-nearly 80 years. The cinematic voice wasn’t imagined. In the 1970s, Brock starred in action movies and later co-hosted the TV wildlife program “Wild Kingdom,” where he wrestled large creatures in the wild.

Brock, I learned, has no medical background. He’s a philanthropist who lives a Spartan life and flies around garnering funds and volunteers to bring health care to people in remote regions (90 percent in the United States and 10 percent elsewhere).

In the 1950s, Brock followed his parents to British Guiana (now Guyana), where his father was a civil servant. He worked as a cowboy on the vast Dadanawa Ranch near Brazil, where generally, as his book title explains, “All the Cowboys Were Indians.”

His appreciation for remote area medicine dates from being crushed by a horse on the ranch and learning the nearest medical care was a 26-day hike away. On the ranch, he witnessed devastating illnesses among the Wapishana Indians — conditions that would be minor and transitory in places where modest care is available.

RAM has aircraft, medical equipment, and a network of volunteer doctors, dentists, nurses, optometrists and veterinarians. They fly to medically underserved areas and establish pop-up clinics in tents or schools.

Brock said at a typical large event, “We have a hundred dental chairs fixing teeth, making dentures; lines of vision lanes testing eyes, mobile vans making prescription glasses while the patient waits; women’s health specialists hunting for signs of breast and cervical cancer; chest X-rays probing black lungs while a legion of nurses diagnose people who had no idea they had hypertension or diabetes from sugary drinks and packaged foods.”

Some clinics are in peaceable settings, planned in advance for rural areas of states like Tennessee, Virginia, West Virginia, New York, Oklahoma and Texas. Overseas, many RAM activities focus on disaster relief. They’ve served patients following a typhoon in the Philippines, earthquakes in Haiti and Nepal, and the refugee crisis in the eastern Mediterranean. In 2016, 10,730 RAM volunteers served 31,000 patients at 70 events on a budget of under $3 million — around $94 per encounter.

Brock notes the difficulties state governments throw in the way of efforts like his: “I have no trouble flying a planeload of doctors into Guyana, but California is a different matter.” In 1997, Brock successfully lobbied for a Tennessee law allowing out-of-state volunteers to provide free care in, appropriately, the Volunteer State. Ten other states have since passed similar laws, but elsewhere in America, charity care stops at the border.

A striking example came after Hurricane Katrina. RAM was on the ground within days, offering care to Louisiana’s devastated residents. Among the volunteers were veterinarians, who had come to care for the countless injured, sick and frightened animals — many of which had become separated from their owners. While the governor signed a temporary waiver allowing out-of-state doctors to lend a hand, no such leeway was offered to veterinarians. Brock had to relocate his volunteer vets to Mississippi. Even now, Louisiana law generally forbids out-of-state physician or veterinarian volunteers.

One interesting note: RAM can claim a first in high-tech health care. In 2015, the group’s Wise County, Virginia, event experienced the first Federal Aviation Administration-approved delivery of medicine by drone — a technology already in use in remote areas of Africa.

Volunteerism is a small sliver of care. But in certain places, it’s every bit as important as the latest cancer cure. Should we impede our better angels?