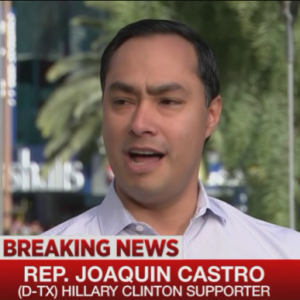 For years now, Rep. Joaquin Castro, D-Texas, has been on a campaign.

It’s not directly related to his political career — or even that of his twin brother Julian, the Secretary of Housing and Urban Development seen as a likely Democratic vice presidential candidate this fall.

Instead, the effort is to raise awareness of what Castro calls the “culprit of obstruction” in the House of Representatives — the singular tradition he says prevents him and his colleagues from getting the big things done.

“People wonder why there’s so much gridlock in Washington,” the San Antonio congressman told MSNBC’s Chris Matthews on Sunday. “Well, in the Senate, it’s the filibuster, but in the House it’s the Hastert Rule.”

The “Hastert Rule” isn’t actually a hard-and-fast rule of any kind.

It’s a tradition begun by Republican Speaker Newt Gingrich — and named for his GOP successor Dennis Hastert — that legislation only receives a vote with support from a majority of the majority caucus in the House.

No speaker has ever kept to this practice consistently, but Speaker Paul Ryan reportedly said he will, granting the wishes of hardline conservatives in the Freedom Caucus.

Even before Ryan, though, adherence to the rule prevented votes on legislation, including immigration reform, which would have passed in 2013 with a minority of Republicans joining the Democratic caucus.

At least, that’s the argument that Castro, a Mexican-American who frequently speaks for Democrats on immigration, has made since arriving on Capitol Hill in 2013.

After his first year in Congress, the representative penned a lengthy reflection titled “Mr. Castro Goes to Washington” for Texas Monthly.

That’s where the president of the Democratic freshman class used the term “culprit of obstruction,” writing that the Hastert Rule “essentially permits 25 percent of the [legislative] body to control 100 percent of the agenda.”

On the 2013 push for immigration reforms that stalled in the House, Castro wrote, “More than 25 Republicans had declared support for comprehensive reform, but if Speaker Boehner stuck to the Hastert Rule, the whole thing would go nowhere. … Would he drop the Hastert Rule again to allow a vote on immigration reform? As spring passed into summer and summer headed toward fall, there was no answer.”

Since assuming office, Castro has criticized the rule in the context of immigration on ABC’s “This Week” with George Stephanopoulos and CNN’s “The Lead” with Jake Tapper as well as in many other forums.

Yet the rule does have its defenders.

“No speaker can survive if he or she brings up a series of bills opposed by a majority of his or her party,” he wrote. “The speaker is elected by a vote of the majority party. Why would that majority keep in power someone who gave the minority the opportunity to dominate the House floor?”

Castro’s office told InsideSources he was unavailable for comment Tuesday, but he’s clearly unpersuaded by the argument Gingrich makes. And so the congressman’s long campaign moves forward, undeterred.