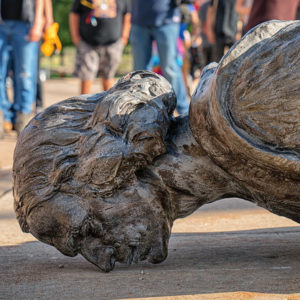 The fallen Christopher Columbus statue outside the Minnesota State Capitol after a group led by American Indian Movement members tore it down on June 10, 2020. (CREDIT: Tony Webster/ Flickr)
[IS] Opinions

Celebrate the Right to Protest

Most people hardly need reminders of their mortality. Mere mortals know there’s a time to live and a time to die, but surely a statue should ensure immortality in history if not in person.

Not so, as Americans are reminded in assaults on statues of people seen as bad guys, traitors, villains to be dumped onto the ash heap of history, no longer venerated as heroes in stone or bronze.

Attacks on statues have a long history.

Red Guards on the rampage in China in the 1960s and 1970s destroyed hundreds of reminders of people they hated. Russian mobs tore down statues of Vladimir Lenin after the demise of the Soviet Union 70 years after he had arisen in triumph as the communist regime’s first leader.

The statue of Saddam Hussein in a circle in Baghdad beneath a hotel where I stayed was toppled after U.S. troops invaded Iraq in 2003. In Afghanistan, the Taliban in 2001 blew up ancient images of Lord Buddha that were more than mere statuary. They were revered works of art, irreplaceable and irretrievable, even if the Taliban called them “idols.”

So it is that Americans just commemorated the signing on July 4, 1776, of the Declaration of Independence. Unlike on previous July 4 holidays, some protesters saw the occasion as a chance to amplify their message that nothing is sacred, that the Founding Fathers were fallible, many of them slave-owners, all from the 13 original British colonies whose forebears had come to the new world from England, Scotland and Wales.

You have to wonder where the idol bashing will stop. It’s understandable that statues of Robert E. Lee, the leader of Confederate troops in the Civil War, the bloodiest in American history, should no longer have places of honor in the American South, homeland of the Confederate states that rebelled against the union in defense of slavery.

I always sort of wondered why Lee, having been defeated by the union army led by Ulysses S. Grant, should have been so honored or, for that matter, why major U.S. army bases in the South should bear the names of Confederate army officers rather than heroes from America’s foreign wars.

There’s no end to calls for bashing statues. In Korea, protesters over the years have demanded the destruction of the statue of Gen. Douglas MacArthur, a 10-foot-tall image in bronze atop an 18-foot concrete base in a park not far from where U.S. troops stormed ashore in Incheon in September 1950.

It was that bold strategy that drove out the North Koreans three months after Kim Il-sung had ordered his troops to invade the South, promising victory within weeks. Police have to keep a watchful eye on the statue while activists of opposing persuasions call for tearing it down or preserving it for the ages.

These days probably no statue has greater immediate meaning for Koreans than that of an innocent young girl seated demurely across from the Japanese embassy in Seoul. The Japanese would love to have it removed, just as they have demanded removal of similar statues elsewhere in Korea and also in the United States.

Those reminders of the tens of thousands of Koreans forced into servitude as “comfort women” for the Japanese in World War II are not going away as long as the Republic of Korea remains a free country, independent of Japanese colonial rule.

In the United States, “Black Lives Matter” is a slogan, a rallying cry.

Protesters have demanded removal of a statue in Washington of Abraham Lincoln above a former slave newly freed from the shackles of bondage. In New York, the statue at the Museum of Natural History of Theodore Roosevelt, the U.S. president who established national parks and forests, astride a horse flanked by an American Indian and a black man, was deemed deeply offensive.

The iconic Washington Monument and the nearby Jefferson and Lincoln memorials survive intact, but images elsewhere of George Washington and Thomas Jefferson, both slave owners, have been vandalized. Protesters would also like to blow up the huge heads of Washington, Jefferson, Lincoln and Theodore Roosevelt, carved in granite on Mount Rushmore in South Dakota. They say the land was stolen from Native Americans.

Americans now appear more divided against each other than in the civil rights movement or the Vietnam War.

At least, however, we can celebrate the freedom that still gives us the right to protest.