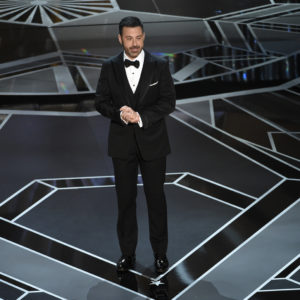 Host Jimmy Kimmel speaks at the Oscars on Sunday, March 4, 2018, at the Dolby Theatre in Los Angeles. (Photo by Chris Pizzello/Invision/AP)
[IS] Opinions

We have now cycled through the bulk of music and entertainment awards this season. After getting through who came with whom and who is wearing what outfit, the new coming attraction for these once-popular evenings of accolades is what socio-cultural or political issue will be espoused by the celebrities.

Of course they have “the right” to launch a salvo about their “issue” or take a jab at a politician or another public figure — so law professors you can hold your pens. But that does not make it, well, right! In fact, what these celebs are doing is bad form and actually cheapens free speech. It does so in two major ways.

First, these impromptu acts are a bait and switch. The shows are promoted as prestigious music or entertainment awards to recognize talented people for what they do. Viewers tune in to see who is recognized and share in the joy and tears of the celebs’ acceptances and hear them thank their mothers and friends and sometimes a litany of people whom we really have no idea what they did for the production, but accept that it must be important.

Most people don’t tune in to listen to the woes of the world; this they can get streaming elsewhere 24/7. And taking pot shots at their collective and de facto nemesis of the year risks alienating viewers. Viewers don’t need to be lectured on where their favorite celeb stands on an issue that may be up for debate such as global warming or a common sense and self-evident bad behavior such as womanizing. This is evidenced by the declining viewership of most of these tributes.

A second reason their actions are bad form is they are taking advantage of the microphone given to them but reserved for a certain time, place and manner — elements of the litmus test for what is acceptable speech. A microphone is given to them for what they did; not to answer any question about what they think. This we can get during any late night or mid-day talk show. Also, nobody else is given the microphone to respond to their diatribes, which is a fair ask during a healthy debate. They’ve morphed what takes place in our personal entertainment space and expanded it to the public discourse space; they’ve invaded our intellectual space.

There is a time and place for everything. Even the least educated ancient Greek knew to espouse his ideas in the agora (the marketplace where all people gathered) and not in the high-land, reserved acropolis. The heart of Greek citizenship was political debate; this was expected of the good citizens living in the polis. But the appropriate time and place of debate were observed.

So celebs, we love your songs and shows, but for the other stuff, you should grab a soapbox and go to the public square, as do the rest of us, to sell your hot ideas. Or put your pen to paper and send it out to cyberspace for all to respond. Enough of the bait and switch and bad-form politicking when you are privileged to hold a hot microphone.