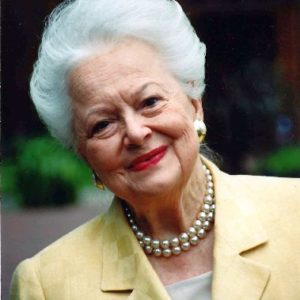 Olivia De Havilland died recently at the age of 104, and depending on your age and your passion for movies, she may be someone you recognize instantly or someone you’ve never heard of; that’s the way the movies are.

But whether you are familiar with her or not, she was the last great movie star of Hollywood’s Golden Age — the mid-1930s to the mid-1940s, right after sound transformed motion pictures.

In those days, Hollywood was Tinseltown, a fantasy world when movies helped our grandparents survive the Depression and World War II. The whole world became enamored of movie stars and in the top echelon of those stars was Olivia de Havilland, indisputable Hollywood royalty.

To some degree, she outlived her fame.

Her first starring role was in 1935, 85 years ago. (Consider that today, Scarlett Johannsson or Charlize Theron would have to live until about 2090 to do the equivalent).

The story of Olivia and Joan was one of the best Hollywood backstories. They were Hollywood’s greatest acting sisters, and true to form, they also carried on Hollywood’s most vicious feud away from the cameras, rarely speaking to each other in the last 40 years of their lives.

De Havilland’s movies included, among others, the classics “Captain Blood,” “The Adventures of Robin Hood” and “Gone With the Wind.” In “Gone With the Wind,” she was nominated for Best Supporting Actress but lost to Hattie McDaniel, the first African-American actress to win an Academy Award. (McDaniel, a true groundbreaker, was forced to accept the award in a segregated ceremony. That was another part of Hollywood’s Golden Age.)

After “Gone With the Wind,” de Havilland could have become stereotyped by the sweet young characters she played on the screen, but she was to show Hollywood a much more formidable side of herself.

In the 1930s actors were little more than property of the studios; the studio heads had contractual authority to put an actor in any role the studio wanted, even if it were detrimental to the actor’s career.

Moreover, while the contract could only extend for seven years, the studios determined what constituted seven years of actual work, because vacations, weekends, holidays and even suspensions were not counted as working time. In this way, they could keep their actors under contract far longer than seven calendar years.

Bette Davis, generally acknowledged as the best actress of the time, challenged the system in court. At the trial, the head of Warner Brothers acknowledged that the actress had to play any role they gave her even if it harmed her image. Even so, Davis lost the suit, was drained of money, and her career was almost ruined.

It is a testimony to her talent that she emerged as arguably the greatest American movie actress ever (sorry, Meryl).

Several years later, de Havilland bristled at the same studio control. Tired of the insipid roles she was being handed, she refused to play them and was suspended from acting for six months.

Moreover, she was told she would have to make up the suspension time when her contract ended. Just as Bette Davis had done, she sued Warner Brothers, and did not act in movies while the suit played out in court.

Unlike Davis, de Havilland won her lawsuit. The court ruled that she did not have to make up the lost suspension time and that the maximum time the studio could hold a performer was seven calendar years, no matter whether the actor was working or not. The ruling loosened the movie studio’s stranglehold on actors.

Thanks to de Havilland, it forever changed the relationship between the two parties and became known as the De Havilland Law.

De Havilland is gone now, and with her an era has vanished as well. She is akin to the last surviving soldier of World War I or the last survivor of the Titanic. From this day forward, there will be no more firsthand accounts by the stars of the dream factory that was 1930s Tinseltown.

But in one respect Hollywood is unique; de Havilland has not really left us. Look, there she is up on the screen, next to a dashing Errol Flynn or a debonair Clark Gable or a “tougher than all of them” Bette Davis.