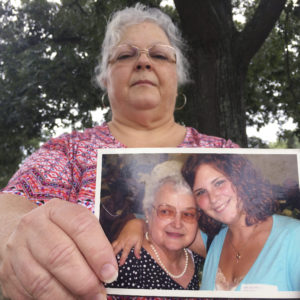 Susan Bro, the mother of Heather Heyer, holds a photo of Bro's mother and her daughter, Monday, Aug. 14, 2017, in Charlottesville, Va. Heyer was killed Saturday, Aug. 12, 2017, when police say a man plowed his car into a group of demonstrators protesting the white nationalist rally. Bro said that she is going to bare her soul to fight for the cause that her daughter died for. (AP Photo/Joshua Replogle)
[IS] Opinions

One person died. Nineteen others injured. Why? Someone decided to commit an act of violence against American protesters in Charlottesville, Virginia.

In other words, free speech suffered a major trial at an alt-right rally this past weekend. And, this trial serves as a litmus test for the American people, indicating how free speech — and civil discourse like protesting — is not what it used to be.

The culture war is unwinnable, for either side, if violence is the solution to repressing “hate speech.”

The problems aren’t the ideologies that are clashing, nor most of the people who buy into the messages of the alt-right white nationalists or the left’s extreme Antifa. The real perpetrators of this incident — and the violence against a variety of political opinions — are seen in the select ranks of extremists who view violence as the only means to affect real change in honor of these ideologies.

A white supremacist plowing a car into a crowd of by-standing counter protesters is not defending liberty.

In fact, these activities reflect the worst of the American people. Sadly, our proud country of differing ideologies, diversity of opinion, and social backgrounds has also suffered a loss.

You don’t necessarily have to agree with my belief in free markets and totally, unhindered freedom of conscience; however, what makes America great is the ability to open civil dialogues and debates in the public square. However, hindering someone’s ability to challenge or defend the status quo by the force of violence is a violation of everyone’s freedom.

This type of violent behavior fuels the fires on both sides. Antifa organizations have a vendetta. White nationalists are going to defend themselves. More violence will pour from this.

Hate speech or bias against the societal narrative are also not the problem. Being able to dissent and voice your beliefs is a part of the American experience — and this sentiment applies to both the left and the right. Whether it’s on campus, at a protest or in the political space, people’s free speech rights need protection at all costs.

The only difference between speech and violence is the action. Acting on violent thoughts will result in the hate speech becoming assault. The last I checked, assault — on any justification — isn’t protected. It’s criminal behavior.

Last, the fault of our culture stooping to the very worst of identity politics is on all of us. We need to resist ethno-fascism and social-fascism just as much as we need to resist more government control. The only catch, though, is that this can only be done through civil engagement.

Having dissenting and harmful opinions is important; however, there is no room to tolerate the actual acts of violence. Oscar Wilde once said, “I may not agree with you, but I will defend to the death your right to make an ass of yourself.”

Personally, I would protect all the protesters’ rights of conscience in Charlottesville as, I am sure, millions of others would. On the other hand, the violence is the very reason we need to revitalize the importance of sitting down, talking issues out, and respecting the humanity of your opponents.

We also need to consider that political violence is terrorism; however, hate speech isn’t. Everyone has the right to form their own opinions, no matter how extreme.

But, there should no remorse for someone who is willingly going to a protest to hurt, and potentially kill someone, of whom disagrees with their belief, in order to make a statement.

That’s an act against freedom.