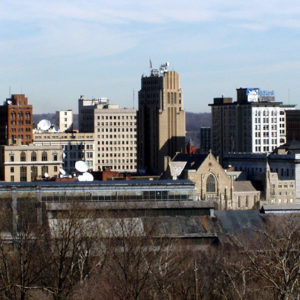 Youngstown, Ohio–Youngstown seems like the heart of the rust belt, a former steel town with a strong union presence that saw massive job losses after changing economic conditions forced the closure of manufacturing plants in the 1970s.  Industry is returning to Youngstown, however–it just looks a little different. Instead of the steel pipes and raw materials the area produced before, manufacturers are instead looking at the area as a perfect location for chemical manufacturing. This, in turn, is boosting hiring in the area.

Royal Dutch Shell is building a $6 billion cracker plant 40 miles south of Youngstown in Monaca, Pa. In addition, PTT Global, a Thai company, is considering a similar scale project in Belmont County. Plants of this scale will create thousands of construction jobs for a two to three year period, and hire a 600 person staff once completed.

These figures don’t include the thousands of jobs necessary to bring the various new plants on line. The Shell cracker plant alone is predicted to provide temporary work for more than 6,000 tradesmen and take 18 months to construct.

“This plant will have serious ramifications for our supply chain companies, especially in plastics and petrochemicals,” says Guy Coviello, vice president of governmental affairs at the Youngstown-Warren Regional Chamber of Commerce.

“The new cracking plants will provide lots of opportunities to attract plastics, petrochemicals, and anybody who wants to be somewhere where the energy to operate a factory is abundant and low-cost, and in a place where there is lots of water for industrial use and great transportation infrastructure, close to major population centers,” he continued.

Already this has caused the employment market to pick up. The Area Chamber of Commerce has partnered with local television stations to highlight different career opportunities that do not require a bachelor’s degree. The same hiring growth has been seen in union jobs.

“All of our local unions are growing and adding members to keep up with the demand that oil and gas has brought to the region,” says Dorsey Hager, executive secretary-treasurer of the Columbus/Central Ohio Building & Construction Trades Council, who is enthusiastic about the benefit the new plants will have for the local economy.

Hager, who represents 18,000 workers in several different construction trades including pipefitting, welding, and general laborers, says that the abundance of natural gas in the area has sparked a burst of construction on both pipeline support systems and manufacturing plants. These projects, which employ hundreds of union workers “would not be being built without the access to the natural gas,” he says.

Cracker plants process ethane, a chemical found in natural gas, into polyethylene, which is used to make plastics and other products. Previously, these plants had largely been centered around the Gulf Coast region, but the explosive growth of fracking means that other areas are now economically feasible. A recent study suggests that Pennsylvania shale could support as many as five such plants, while still producing enough gas to export.

This is encouraging for the area economy. Since the growth has been driven by shale exploration, its growth is not dependent on any specific government policies. In fact, when asked if anything could prevent the predicted job growth from arriving, Hagar struggles to think of anything.

Ohio is attractive to manufacturers for a number of reasons. For one thing, energy is cheap. Years of low oil prices have left the state with a glut of fracked natural gas from the Marcellus and Utica shales. As a result, the state has some of the lowest gas prices in the nation. Several companies are pouring billions of dollars into constructing new natural gas power plants. At the beginning of 2017, ten different natural gas power plants were in development in the state.

“Ohio ‘deregulated’ and became an open market system in 1999, allowing customer choice in electricity generation while saving consumers an estimated $3 billion per year, according to a recent Ohio State University report,” writes Jackie Stewart, state energy director for Energy In Depth-Ohio. “Today, through this free-market based system, Ohio has become very attractive for private investment of natural gas-fired power plants due to the fact that an environment has been created in the Appalachian region that has led to the lowest natural gas prices in the developed world.”

According to one study, while Ohio lost hundreds of thousands of manufacturing jobs more than a decade ago, in the next ten years it will need another 50,000 production workers.

Still, area employers are struggling to fill positions because of a shortage of properly trained workers. Several groups in the area are working to address this skills mismatch. The Cleveland Foundation, a community charity organization funded by area donors, published a report highlighting how education was not necessarily matching employer needs.

“Jobs in growing, high-potential industries offering family-sustaining wages often sit vacant due to the limited number of qualiﬁed, credentialed candidates,” the report found.  It also predicted high growth among construction, metal and plastics, and installation and repair jobs paying these “family supporting” wages. Despite good job prospects, these fields do not seem to be attracting students. As a result, demand for installation, maintenance, and repair workers, as well as skilled production workers, outpaced supply by several thousand workers in 2015.

The report admits that it focused on two and four year institutions, an approach that “does not capture every pathway to employment.” At the same time, it shows a picture of the demand for workers in skilled trades that do not require a four-year degree.

The investments in and around Youngstown are part of an international shift in chemical manufacturing brought about by the fracking revolution. In essence, natural gas in the United States is so cheap, European observers are afraid it will sink their chemical production industry altogether.

“The Marcellus field, which spreads over several states and is just one of many in the U.S., produces 15 billion cubic feet of gas a day which is almost twice the U.K.’s entire consumption,” writes Anthony Hilton, a British economist and business writer.

“But the result is that U.S. prices have disconnected from the rest of the world and the subsequent feedstock prices have given American chemical plants so vast a price advantage that, on paper at least, there’s no way Europe can compete,” he continues. “It is staring down the barrel of bankruptcy, not now, but in a few short years, unless it can find some way to get its raw­ material costs down to American levels.”

That’s good news for the Youngstown area. Although the days of steel plants and metal sheeting factories have passed, fracking and energy development is giving the area a renaissance. Chemical plants offer steady, middle-class manufacturing jobs that do not necessarily require a college degree. Youngstown isn’t out of the game, it’s just warming up for round two.