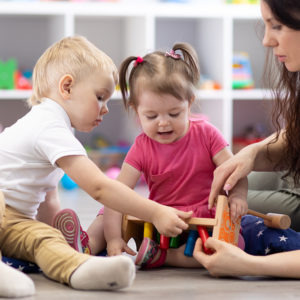 Childcare is the Kaleidoscope of 2021

They say a picture is worth a thousand words. But sometimes, one word is a kaleidoscope.

It evokes the mayhem managed by millions of families during the COVID-19 pandemic and, at the same time, evolving, deep-rooted cultural norms.

Look at it from a different angle and it captures the distortions of dependency-addicted statism that marks our political moment.

Twist it again and you’ll see the modern media’s groupthink at work.

In a recent story on ABC’s Good Morning America, we see the kaleidoscope in action. The story framed the lack of affordable childcare as a big reason why millions of women are staying out of the workforce. Fair enough.

ABC’s journalists could have then pushed the story in the same direction so many others have and highlighted ongoing political efforts to subsidize childcare.

After all, journalists share the natural bias toward action. And their stories usually paint a picture of heroic, roll-up-the-sleeves problem-solvers pushing for more spending.

But ABC deserves credit for taking the story in a different direction.

They asked a simple question: Why has childcare become less affordable? That is the question of working families who don’t schedule their mornings around catching politicians between committee meetings.

It’s funny what can happen when journalists ask questions rather than adhere to the dominant narrative structure of the day. In this case, ABC raised the possibility that government itself owns some of the responsibility for unaffordable childcare.

The network’s journalists even pointed out that the number of childcare workers has fallen 15 percent since the pandemic began. But the groupthink must have taken hold as ABC didn’t connect the dots any further.

Allow me to do so. By now, we all understand how federal policies like the unemployment bonus have fueled a labor shortage across the economy. Like elections, paying Americans not to work has consequences.

Add to that the educational requirements imposed by states on childcare workers. The Bureau of Labor Statistics has pointed out that most states even require childcare directors to have a bachelor’s degree. This pushes many would-be childcare workers out of the market.

The results follow the basic law of supply and demand. When a good or service like childcare is in high demand but in short supply, prices rise. Helping more childcare workers access the market would increase supply, help match demand, and drive the price of childcare down.

If Chipotle has to raise the price of a burrito to make up for rising labor costs, why shouldn’t that same principle apply to childcare—a market with even more supply-side restrictions?

To caffeine-addicted journalists eyeing a deadline, this story doesn’t easily fit the paradigm of a red team-versus-blue-team squabble over an underfunded program.

But that’s what makes it tragic. It’s a story of the government squeezing working women from both sides. Bad policies like education requirements and staff-to-child ratios have driven more childcare workers, over 90 percent of whom are women, out of the market. At the same time, other policies have increased costs for moms who rely on childcare to work.

If you pair sensible regulations which encourage competition, choice, and more childcare workers with welfare programs that do much more to get child support to low-income families, you just might see progress.

Unfortunately, the Biden administration has proposed the opposite—more subsidies to cover those higher costs.

But American families know all too well that more public money doesn’t reduce costs. It obscures costs. And, without transparency, prices go up.

We see it in healthcare and higher education. The government has intervened and subsidized more and more over decades. And the price we pay goes higher and higher.

To prevent the same dynamic in childcare, let’s twist the kaleidoscope again. The solution—more reform, not more spending—is in there somewhere.

Scott Centorino is a Senior Fellow at the Foundation for Government Accountability. He wrote this for InsideSources.com.