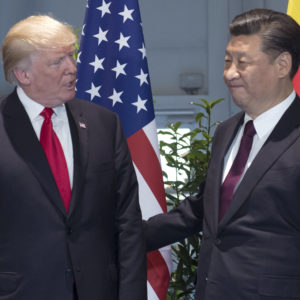 China Is the Force Behind Korean Diplomacy

SEOUL — The heavy hand of China is evident in the great display of showmanship in the recent summit between South Korea’s President Moon Jae-in and North Korean leader Kim Jong-un. The two leaders credited the Korean people, meaning themselves, with arranging the meeting as “masters” of their own “destiny,” but those words give far from a complete understanding of the forces that prompted their meeting.

Certainly, Moon and Kim joined in a brilliantly choreographed display of their desire to bring North and South together, and it was fitting for them to meet in the “truce village” of Panmunjom, where the Korean War armistice was signed in July 1953.

Now perhaps North and South Korea will be able to join in a “peace agreement” if not an actual treaty in place of the armistice, heralding what the two proclaimed as “a new era” on the Korean peninsula. Their final declaration, signed in Peace House on the South Korean side of the military demarcation line between the two Koreas, offers hope for friendly relations on all levels, commercial, cultural and personal, that would have seemed impossible while Kim was ordering missile shots and nuclear tests, the last and biggest last September.

Significantly, however, the Panmunjom declaration gives no hint of the influence of the power that had much to do, one way or another, with bringing North and South for the summit. On the northern side, China’s role was paramount. China’s President Xi Jinping, by inviting Kim and his entourage to Beijing weeks earlier for a friendly conversation and dinner reception including both their wives, had to have advised him on the wisdom of getting along with his South Korean neighbor.

Kim, making his first trip outside North Korea since succeeding his father, Kim Jong-il, in December 2011, was treated in Beijing like a close ally and friend. There was no hint that China had been abiding by U.N. sanctions, depriving the North of much of the fuel, food and other supplies needed to sustain its economy while he was squandering resources on fabricating nuclear warheads and the missiles to send them to distant targets. Behind closed doors, President Xi no doubt made clear it was time for a fresh approach.

China is not bragging abut the pressure exerted on Kim to reconcile with South Korea, but Hua Chunying, spokeswoman at the Chinese Foreign Ministry, emphasized the need for “dialogue and negotiation” while China “plays its due role for the establishment of a peace system on the peninsula.”

Said Hua: “Denuclearization of the Korean peninsula and the establishment of a peace regime should be pursued simultaneously so as to eventually realize permanent stability on the peninsula and the surrounding region.”

North Koreans, however, have ambivalent views about China, whose forces rescued the North from annihilation by the United States and South Korean in the early months of the Korean War. The leadership under the Kim dynasty, first Kim Il-sung, the regime founder, then his son Kim Jong-Il and now the founder’s grandson, Kim Jong-un, know they need China for economic and military support but grow restive under the constraint of their overwhelming dependence on China for almost all their fuel, much of their food and many other products. North Korea may resent China’s domination, but their regime could not survive without Chinese support.

Would it be too much for the North Koreans, maybe not Kim Jong-un himself but his mass media, notably the party newspaper Rodong Sinmun, to recognize Chinese commerce, trade and influence?

Right now, the North Koreans are attempting to get out from under U.N. sanctions that China is supporting. Sanctions are hurting. The Chinese, at the behest of President Xi, have had to make clear to the North Koreans that their bellicose policies were only increasing instability and the danger of war on the Korean peninsula. Against that background, Kim in his New Year’s address reversed himself completely, deciding to send a team, along with entertainers and taekwondo wrestlers, to the Pyeongchang Winter Olympics.

And, of course, it was for the same reason that Kim promoted his summit with South Korea’s President Moon even though neither of them uttered a word about China in their conversations at Panmunjom. Similarly, they ignored the influence of President Trump, who had threatened to inflict “fire and fury” on North Korea after the North’s most recent, and by far most powerful, nuclear test in September. Now Trump and Kim are talking about their own summit, the first ever contact between a U.S. president and North Korean leader.

We may be sure Trump will want to stress the need for denuclearization, barely mentioned in the Panmunjom Declaration signed by Moon and Kim. Trump has credited Xi with having facilitated peace on the Korean peninsula despite his concerns about China’s enormous trade surplus with the United States. China’s role is sure to permeate the Trump-Kim summit as it did the Moon-Kim summit though Xi’s influence will not be recognized in any of their comments or formal statements.