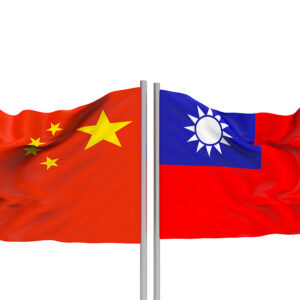 China, that is the People’s Republic of China, appears increasingly eager to take over Taiwan, the Republic of China, the highly fortified island province about 100 miles across the Taiwan or Formosa Straits from China’s Fujian Province. We’re getting reports of China’s President Xi Jinping building up missile strength in Fujian and also engaging in cyberwarfare against Taiwan.

“To us, it’s only a matter of time, not a matter of ‘if,’” said U.S. Rear Admiral Mike Studeman, intelligence chief of the U.S. Indo-Pacific Command, before China under Xi decides to retake Taiwan militarily. “If you understand the problem set, you understand that Taiwan will unlikely fold based on economic, and informational and diplomatic influence alone,” he remarked in an online conference reported by Bill Gertz of The Washington Times.

The inference was clear. Taiwan as an independent entity of about 24 million people, an economic powerhouse, and a full-fledged democracy, will survive on its own unless or until China goes to war to recover the island. China has repeatedly, routinely, stated its claim to Taiwan ever since the Nationalist forces of Generalissimo Chiang Kai-shek retreated to the island redoubt after Mao Zedong’s Red Army completed its conquest of the mainland in 1949, but lately the noises from Beijing are getting louder.

As China swings its weight around Asia from the Korean peninsula to the South China Sea to the borders of India, the Pentagon is taking the threats ever more seriously. The primary target undoubtedly would be Taiwan, which China views as a breakaway province under American control supported by Japan, which wrested the island from the Chinese in the Sino-Japan war in 1895 and ruled for half a century until Japan’s defeat in World War II.

China’s strident threats against Taiwan present President Joe Biden with a challenge to be taken as seriously as China’s bond with North Korea, which survives as a Chinese protectorate reliant upon China as a military ally and source of oil and much else. Biden has yet to demonstrate that he would be ready to defend Taiwan in an armed showdown.

The U.S. relationship in Taiwan, however, is woven tightly in Cold War history. Hard-liners in Washington, after the Communist victory in 1949, talked of “unleashing Chiang Kai-shek,” suggesting the U.S. might support the generalissimo in an unlikely attempt to recover from defeat by the Red Army. U.S. concerns about Beijing these days evoke memories of the period when the U.S. recognized the government in Taipei as the legitimate ruler of the entire mainland.

Tensions eased when Henry Kissinger, secretary of state under Republican President Richard Nixon, visited China in secret half a century ago, in July 1971, laying the groundwork for Nixon’s week-long mission in February 1972 as the first American president to call on China’s communist leaders. Finally, on January 1, 1979, Jimmy Carter, the liberal Democrat, transferred recognition from Taipei to Beijing.

The switch was acceptance of the reality that the Communist regime in Beijing, by then under the reform-minded Deng Xiaoping, ruled the mainland. The U.S. no longer had an embassy in Taipei, but an American Institute replaced it. No longer bound to Taiwan’s defense by a defense treaty, the U.S. passed a Taiwan Relations Act ensuring the U.S. could go on selling weapons to Taiwan. Bill Clinton as president in March 1996 ordered an aircraft carrier battle group into the Taiwan Straits after China fired missiles as Taiwan citizens were about to vote for a new president whom China believed would declare Taiwan’s independence.

Since then, however, China’s military strength has increased immeasurably. The U.S. would have to dispatch far more than a single carrier group if Chinese forces were to invade Taiwan. Actually, however, there are reasons to hope President Xi will follow the path of forbearance.

The Chinese are furious over American arms sales to Taiwan, more than $5 billion last year, but would they jeopardize their stupendous trade surplus with the U.S. of more than $300 billion a year? And would they want to lose their trading relationship with Taiwan, from which China imports much-needed technology products, notably semiconductors, for a trade deficit last year of nearly $87 billion?

Taiwan’s reliance on exports to China gives Beijing tremendous leverage over Taiwan. No way will Taiwan declare “independence,” though it functions as an independent state. At the same time, backed by the U.S., Taiwan has its own defenses. For all sides, the best solution is the status quo in which Biden never faces the question of rushing to Taiwan’s defense in a war in which millions could die.