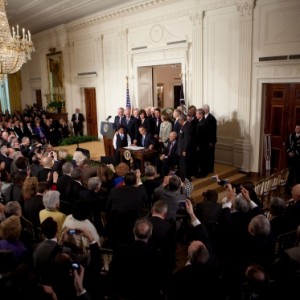 President Barack Obama reaches for a pen as he signs the health insurance reform bill in the East Room of the White House, March 23, 2010. (Official White House Photo by Lawrence Jackson)

It is now official. I am on Obamacare (aka the Affordable Care Act).

I had hoped that I would not personally be feeling its effects so soon. But public policy reshaping one-fifth of the American economy is inevitably felt by all of us.

When did it hit home for me? Remember how President Obama said, “If you like your health care, you can keep it”? As it turns out, that wasn’t true. “Call it the stupidity of the American voter” that the Obama Administration was able to deceive about so many aspects of the law. I received a notice from my insurer earlier this year that my plan would no longer be available in 2015, and I was encouraged to sign up on the exchange during open enrollment last month.

I liked my insurance plan. In the past, I have been on expensive plans provided by employers, but for me, these always seemed to be a waste of money. For most of the past several years, I had been purchasing my own plan. I had researched what was available, and I found catastrophic coverage that would cover me in the event of a tragic accident or an unforeseen illness.

Many would find the $10,000 deductible for my previous plan unappealing, but I visit the doctor about once per year. With a premium of only $84 per month, this was an ideal plan for my lifestyle. The low premium meant that I could save and invest more. In the event of a major medical expense, I may need to spend some of my savings. But the far greater likelihood is that I would get to keep money that would otherwise be pocketed by the insurance company via higher premiums.

I had hoped the Obamacare exchange would offer a plan similar to the one I had chosen in the free market, but my options were very limited. The option closest to my previous plan forced me to accept a lower deductible at $5,000. A lower deductible is a good thing, but not relative to the cost. My premium rose 122% because I was forced to accept coverage I did not want or need.

But while I happen to prefer a high-deductible, low-premium plan, others would rather have the opposite. And this is causing serious financial strain. Many middle-class families are now being squeezed by higher deductibles than they had under their pre-Obamacare plans. A survey from the left-leaning Urban Institute found that 23 percent of workers with employer-sponsored coverage and who earned between $33,000 and $95,000 per year were struggling with their medical bills as deductibles and co-payments have risen.

Herein lies one of the fatal flaws of Obamacare: it doesn’t allow consumers the freedom to choose. What I discovered firsthand is also clear from the data. Late last month, the Heritage Foundation released a study that found diminished competition in the insurance market because of the implementation of Obamacare. Based upon the number of insurers offering coverage, the market for individual insurance is 21.5% less competitive than it was two years ago, prior to Obamacare’s implementation. In one-third of American counties, consumers can choose between only one or two insurers, making the market a monopoly or duopoly.

I will offer some praise for the ease with which I could browse and compare plans on the exchange. This made it extremely simple for me to determine that the lack of choice with Obamacare does not stop with an ability to choose different insurers. As I perused my options for plans on the exchange, it was immediately apparent that the plans at each coverage level were remarkably similar. This is because Obamacare’s rules effectively standardize insurance.

These requirements have driven the cost of insurance higher. According to the Kaiser Family Foundation, average premium costs for families have risen $3,704, or 33 percent, under President Obama.

Another challenge comes for those who enrolled in Obamacare last year and want to keep their plans in 2015. This is set to hit consumers with substantial premium increases ranging into the thousands of dollars if they do not change their plan.

In 2009, as he campaigned to pass Obamacare, President Obama stated: “My guiding principle is, and always has been, that consumers do better when there is choice and competition.” He was absolutely correct. But this is not what has happened under Obamacare. Health care spending is expected to continue rising in the years ahead. If we’re going to get costs under control and provide better healthcare options for all Americans, then we need to replace Obamacare with policies that promote choice and competition.