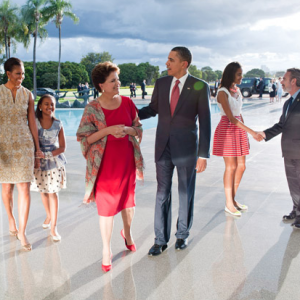 Brazil narrowly chose to reelect President Dilma Rousseff, and now she has an important choice to make about the future of Brazil’s economy: whether to take the necessary action to get Brazil’s economy back on track. Here’s an easy place to start: eliminate all tariffs and discriminatory taxes on information and communications technology (ICT) products and services.

Brazil currently adds 5 percent through taxes and 12 percent through tariffs on a wide variety of ICTs, effectively treating computers and broadband like other nations treat cigarettes and alcohol. This adds an average of 17 percent to the cost of a wide range of goods and services over and above standard sales taxes, ahead of its South American neighbors Argentina at 13 percent and Ecuador at 11 percent. On specific goods like iPads these levies combined with numerous sales taxes can actually raise the total cost by nearly 50 percent. In fact, only four other nations worldwide impose higher ICT taxes and tariffs than Brazil.

These government-added costs are so high that it’s not unusual for Brazilians to head to Miami to do their electronics shopping just so they can avoid these high taxes. Of course, not everyone can afford a flight just to lower the cost of their iPad: more commonly, high ICT prices simply lead to reduced consumption. In other words, a more expensive iPad is an iPad that fewer people will buy.

Lower consumption is problematic in itself, but it gets worse. By raising ICT prices and therefore slowing ICT adoption, Brazil slows the growth of sectors throughout the economy. Computers, broadband, and other ICTs are increasingly the “tool” of choice for businesses large and small that want to grow. In fact, evidence from nations around the world clearly shows that greater business investment in ICT leads to higher productivity and income growth. This is perhaps one reason why from 2005 to 2011, only 28 percent of GDP growth in Brazil came from improvements in productivity, compared with 84 percent in a sample of low and middle-income nations.

Brazil’s high added costs on ICT goods are all the more unfortunate because the country has been making significant headway in other areas of ICT use. The country has poured a good deal of resources into the growth of telecommunications networks including providing tax incentives for investment in infrastructure.

One of President Rousseff’s primary choices in her next term as President will be whether she decides to chart the right course toward robust economic growth. Helping to transform the Brazilian economy into a digital economy will be one key step, and eliminating the self-imposed harm of government imposed ICT tariffs and taxes is a way to progress at the stroke of a pen.