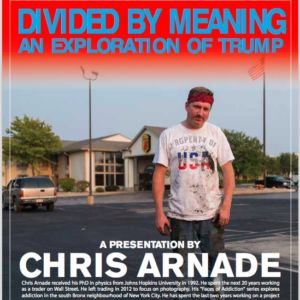 Back Row Hillbillies: Chris Arnade and J.D. Vance talk about the Rust Belt

Chris Arnade calls them “back-row kids.” They are the ones left behind by the global, post-industrial economy. They live in places like Flint, Michigan and Youngstown, Ohio. Some of them are the same “hillbillies” V.D. Vance described in his bestseller, Hillbilly Elegy. Far too often, these are the people struggling to find gainful employment and to form a sense of community in the post-industrial Midwest, the region sadly deemed the Rust Belt. Arnade, a former Wall Street trader, has spent the last three years taking pictures and talking to people in economically depressed regions. Vance is returning to Ohio to work for a venture capital firm focusing on investing in the area.

The two men approach the issue of regional economic stagnation from very different angles. Vance’s book, part autobiography and part social commentary, focuses on culture and personal decisions. Meanwhile, Arnade focuses on individual stories, seeing the larger trend as indicative of a structural failure in the economy. Speaking at the “Rise of the Rest” conference in Washington on Thursday, Vance spoke with Steve Case of Revolution Venture Capital about promoting new development in unexpected place, such as the Rust Belt. On Friday, Arnade spoke to a small group at Johns Hopkins University in Baltimore.

Arguing that the “most fundamental divide beyond race is education,” Arnade focused on the lives of people who lacked the education or financial resources to succeed in the current economy. Interested in understanding Trump’s success, Arnade looked at the counties that swung from Obama to Trump in Michigan and Ohio. He described these areas as towns “where Walmart was built on the site of the old factory.”

He found that the economic frustration he had seen for years led many white voters to support Trump, while minorities became politically resigned and did not participate in the political process.

“The focus on data [in the current economy], leaves many people behind,” Arnade said. “Addiction often is a result of despair and trauma and a sense of not being included.”

Arnade acknowledges that the present economy functions on certain core ethics and expectations. For his “front row kids,” intellect is of primary importance and a person’s identity is defined primarily through their education and career. For those Arnade deems “back row kids,” the decency of hard work is a core ethic and identity often comes from community and faith.

What Vance and Arnade agree on is that the Rust Belt needs economic revitalization.

“It’s not a sign of a healthy country if you are asking everyone to be internal immigrants,” said Arnade.

Vance himself moved back to Ohio to work at promoting economic development in the state.

When it comes to the question of what to do, however, they come to very different conclusions. Arnade, a socialist who admits that he voted for Bernie Sanders, sees little hope for improvement. Repealing trade deals won’t bring back the factories, or the jobs and without them, the communities he visits will continue to struggle.

Meanwhile, Vance has just started a new career working as a venture capitalist for Steve Cases’ firm Revolution. At Revolution, Vance is working to expand the Rise of the Rest of Us initiative, which is focused on growing investments in startups outside the Silicon Valley and New York City tech bubbles. He has a dream of helping to spur technological innovation in the Rust Belt.

“If we build these regional urban powerhouses, we can do a lot of good,” Vance said.

The conference in Washington hoped to bring together entrepreneurs to discuss ways of developing their businesses, including sessions on branding and internet development, as well as discussion on the means means of fostering state-level initiatives that help small business founders.

Arnade’s photography shows that the need is there. Hopefully, the initiative Vance and Case have started will be able to help bring the back row kids fully into the 21st century American economy.