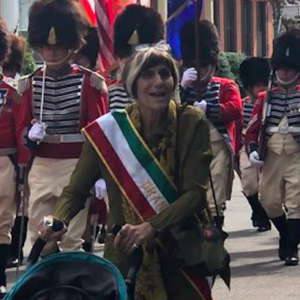 Christopher Columbus and the Government We Deserve

No member of the U.S. House of Representatives is more “progressive” than Rosa DeLauro, D-Connecticut.

Born in 1943, to a political family — her mother served on New Haven’s Board of Alders for an interminably long time — DeLauro attended Marymount College and Columbia University. She was “the first executive director of EMILY’s List” — an organization dedicated to electing abortion-friendly female Democrats. Work for Chris Dodd and Michael Dukakis also helped pay the bills.

DeLauro successfully directed a nationwide PR campaign to oppose the Reagan administration’s aid to the Nicaraguan Contras. Cutting her teeth in an era when aspiring pols were willing to wait their turns, she delayed running for office until 1990. An endorsement from The New York Times and an opponent who called her “Walter Mondale in drag” helped secure victory in a congressional district with the beyond-liberal Elm City at its center.

In nearly three decades of “public service,” DeLauro’s been a toe-the-line Democrat and a reliable backer of unlimited government and identity politics. The Council for Citizens Against Government Waste puts her lifetime voting record at 9 (out of 100). She thinks gun violence is “a public health emergency,” seeks a national soda tax, and enthusiastically propagates the myth of the “gender pay gap.” It would be nearly impossible to find a fedpol who leans harder left.

But DeLauro is not down with demonizing Christopher Columbus.

Asked by the Yale Daily News if she favors changing the name of the New Haven-based Christopher Columbus Family Academy, DeLauro replied that she did not. Performing a virtuoso act of politically artful dodgery, the congresswoman shifted from an inconvenient fact about the past to a virtue-signaling opportunity of the present: “We ought to be more focused on the repression of immigrants (today) than concerning ourselves with trying to denigrate someone else who created an immigrant experience.”

It’s worse than you might think, though. DeLauro’s comments were made at a ceremony in which members of the Knights of Columbus, “in full regalia,” honored their hero with the laying of several wreaths at his Wooster Square statue.

Doesn’t DeLauro know that assailing Columbus is a key priority for the cultural left? Is she … nuts?

No. She’s a politician. In her world, votes trump ideology. According to realtor.com, New Haven is the metro region “with the highest percentage of Italian Americans.” The last census revealed that almost one in five Nutmeggers — a share higher than in both New Jersey and New York — trace their lineage to “the Boot.”

Which brings us to a useful thought experiment: Would DeLauro’s fealty to the “discoverer” of the New World vanish, if indigenous tribes, pueblos, communities, bands, rancherias, and nations started making big donations to her next campaign?

The answer’s obvious — and important to remember, as the 2020 election cycle gets underway.

Expose yourself to a decent amount of political coverage between now and Nov. 3, 2020, and you’ll receive a barrelful of bellyaching from campaign-finance “reformers.” Decrying “special interests” and “corporate money,” they’ll charge that elected officials are beholden to the highest bidders, not “the people.”

Here in reality, for decades, the verdict’s been in on political contributions’ effect on policymaking. The evidence simply doesn’t exist. The claim of “legalized bribery” has never been confirmed by credible researchers. Despite the shibboleths of populists left and right, money can’t make a politician take an action that poses anything beyond a trivial re-election risk.

“Job” security is the reason DeLauro declined to berate Columbus, and it’s why an ideological opposite adores NASA. Sen. Ted Cruz, R-Texas, a “fiscal conservative” who castigates the “deficit and debt” as “immoral,” represents a state that houses the Johnson Space Center — and its “nearly 10,000-person workforce.” Little wonder that he grew greatly agitated, earlier this year, when the Alabama-based Marshall Space Flight Center was picked to lead “the agency’s Human Landing System Program for its return to the moon by 2024.” In a letter co-signed by two additional Texas fedpols — both Republicans — Cruz griped that since “‘Houston’ was one of the first words ever uttered on the moon … (it) should be where the lander that will once again send Americans to the lunar surface is developed.”

Pols are keenly aware of what engaged constituents treasure, despise and fear. With antennas carefully calibrated to pander mode, elected officials “give” voters what they want. It’s the explanation for a mega-“woke” member of Congress refusing to denounce Columbus. Voters, whatever their preferences, are the ultimate special interest.