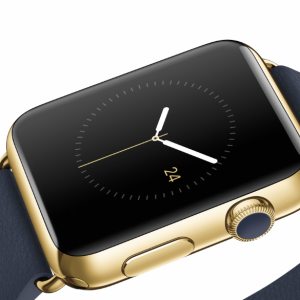 Chronographs, Anachronisms, and a Brief History of Time

Where is the Artistry in the Apple Watch?

Theologians, including St. Augustine, have struggled with the concept of time. He mused: “What then is time? If no one asks me, I know what it is. If I wish to explain it to him who asks, I do not know.”

Augustine, however, could not wear time on his wrist in the fifth century. But in the 21st, Apple, the company that perhaps best epitomizes our era, has created an instrument for the ages. In Apple’s words, their new watch is: “Our most personal device yet;” “An incredibly precise timepiece;” “Entirely new ways to stay in touch;” “A smarter way to look at fitness.”

Each marketing ploy has only questionable relevancy to our world. “New ways” to communicate sounds great. But the Apple Watch actually makes “emoticons” seem downright Shakespearean by comparison to its innovation (?) of sending your heartbeat to someone.

Over the past two decades, phones and computers have become objects we can take with us everywhere we go. There is rarely a break from calls, texts, and emails. But that’s not quite enough. A phone can rest in a pocket or be left on our desk while out to lunch. We can now strap this functionality to our bodies.

In accordance with good manners, we may put our phones away while at dinner with a friend or in a meeting, but we can now always be checking our “watches” to ensure we have not missed an important email.

Of all the superfluous features offered by the Apple Watch, perhaps none is as redundant as its ability to tell time. But let’s come back to this point.

In today’s world, we experience time in a mostly-linear manner. Time progresses. The advent of clocks furthered this concept, but Judeo-Christian beliefs were a point of origin. For Jews, there is movement from the Creation towards the arrival of the Messiah, and for Christians, to the Second Coming. This is in contrast to many other cultures in which time is cyclical, with days and seasons repeating, and with religious events occurring outside of time.

Such a progressive conception of time has delivered modern business. We invest, accumulate interest, buy low and sell high.

Accurate timekeeping developed out of necessity for navigation. Latitude can be determined by observation, but longitude is a different story. For much of history, when a ship set out to sea, location was guesswork based on starting point, direction of travel, and speed. But with an accurate clock that kept the time of the port of origin, longitude could be found with much greater precision.

Time became more essential to everyday life with the rise of the Protestant work ethic and Benjamin Franklin’s wisdom that “time is money.”

Gradually, time has shifted to a more abstract concept. Railroads led us to standardize time zones. With globalization, the time at a given location may not matter. What matters is where and when one wishes to do business.

Our lives have grown more dependent on precise timing. But this is irrelevant to why anyone would purchase an Apple Watch.

The purchase of an Apple Watch has absolutely nothing to do with functionality. It’s a duplication of other devices, and it’s dependent on other devices. GPS and communication will only be possible when one has their phone within range.

So the Apple Watch is about something else. For Apple, this is a venture into the luxury market, with some models priced at $10,000-$17,000.

The luxury watch market is truly about superfluousness. Luxury watches rarely keep good time compared to much-cheaper quartz watches (or a cell phone). Most must be wound every few days if not worn continuously. Star charts, tourbillons, grande complications—these are novelties rather than useful devices, but they can add several hundred thousand dollars to the price of a watch. So perhaps the uselessness of an Apple Watch is a selling point.

But great watches are about craftsmanship, and collectors value that. Al Armstrong, an expert jeweler in Hartford, saw little threat to the luxury watch business in Apple’s new device. “I’m in the art business. I sell shrunken micromechanical miracles. They were created over centuries with no electricity and no computers.”

It may take a single Audemars Piguet craftsman six months to complete one watch. A watch is a work of art. Says the slogan of another great horological company: “You never actually own a Patek Philippe, you merely look after it for the next generation.”

Apple operates on a shorter time horizon. Its product life cycle is months rather than lifetimes.

As theologians once wrestled with time, now scientists do. Modern physics remains unsure of time’s actual existence. We can thank Albert Einstein and his Special Theory of Relativity for this insight. What is happening “now” is entirely a question of perspective from our place in the universe.

So in this context, perhaps the Apple Watch truly is the future. Mankind’s perception of time has continuously altered the world around us, which has changed in tandem with how we keep time. Now, unsure of time’s existence or whether we even care one way or another, we have a true watch for the modern era, devoid of purpose and stripped of artistry.