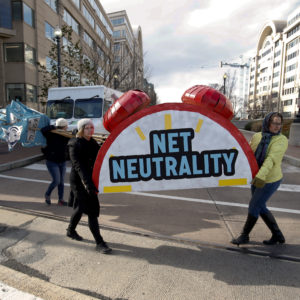 Sammi LeMaster, left, and Katherine Fuchs, right, carry the top of an alarm clock display that reads "Net Neutrality" down 12th Street SW to their truck after a protest at the Federal Communications Commission (FCC) in Washington, Thursday, Dec. 14, 2017. (AP Photo/Carolyn Kaster)
[IS] Opinions

By any legitimate measure, the Obama administration’s legal approach to Net Neutrality was an unmitigated disaster.  Since the Clinton era, the bipartisan approach to regulating the Internet was one of great reluctance, if not nurturing care.  Beginning in 2010 and formalized in the 2015 Open Internet Order, however, Obama’s Federal Communications Commission would abandon this largely hands-off path, taking up the most regulatory arrow in its quiver—Title II common carrier regulation.

The consequences were not surprising.  Unrefuted evidence shows that broadband investment plummeted by over 20 percent, a collapse that brought with it a significant reduction in sector employment and the slowed growth in average connection speeds due to the delayed deployment of faster networks.  Nearly every measure of industry performance turned to the worse as regulated firms responded to the politically-motivated decision to apply a 1934 law designed for the old Ma Bell monopoly to the modern Internet.

Diminished investment was not the result of Net Neutrality, per se.  Broadband providers support the general precepts of Net Neutrality including transparency, no blocking, and no unreasonable discrimination.  This stunning, consumer-harming retort to the FCC’s decision was not about Net Neutrality but about common carrier regulation under Title II.  In the words of Comcast’s CEO Brian Roberts, broadband providers were more concerned about “the authority of the government to go to places that they said they weren’t going to, but legally they could go to [] with Title II.”

The “place” most feared by broadband service providers is retail rate regulation.

In 2015, then FCC Chairman Tom Wheeler declared, “we are not trying to regulate rates.”  In truth—a concept Mr. Wheeler holds little regard—the misapplication of the rate regulation provisions of Section 201 and 202 of the Communications Act laid the foundation for Mr. Wheeler’s rules.  Chairman Wheeler’s Net Neutrality is, in a nutshell, zero-price wholesale rate regulation without due process.  In layman’s terms, the Obama Administration’s rules arbitrarily regulated the price broadband service providers (“BSPs”) can charge content companies like Google and Netflix to reach customers at zero—even though edge providers clearly impose costs on BSPs’ networks—but at the same time robbed BSPs of the ability to challenge such price regulation through the tariff process.

Now, it appears, the Democrats have retail price regulation in their sights.

But to what end?

In a floor speech given last week, Senator Charles Schumer announced the purpose of the CRA was to permit the FCC to use Title II to regulate the retail prices of broadband service.  According to Mr. Schumer, the government should not let broadband providers “charge whatever they want.”  Internet access is a “necessity” and should be “affordable to every American, regardless of your ability to pay.” In fact, Mr. Schumer suggests the Internet might be “free [] like our highways.”  Highways are not free, of course, but are provided (poorly, by the way) by our government through a massive tax program.  Mr. Schumer is a staunch supporter of government’s provision of broadband service through tax/subsidy schemes that have devasted financially a number of municipalities.

The Editorial Board of the Los Angeles Times—an ardent proponent of net neutrality rules—recently wrote that the CRA “maneuver is likely to be more of a distraction than a solution.”  Indeed, it is not clear that CRA restores Title II regulation.  But if it did, the Democrats have discounted one detail:  Unlike Obama’s FCC Chairman Tom Wheeler, FCC Chairman Ajit Pai and his Republican majority do not believe due process is a doormat.  Title II, properly and legally implemented, would radically alter financial transactions on the Internet, forcing content companies to pay tariffed and positive prices (set in a formal rate process) to terminate their content over broadband networks.  And, Title II permits, if not mandates, slow-lanes and fast-lanes.

“Truthiness” is the currency of the Democrats’ Net Neutrality platform.  Facts, due process, and real solutions be damned.  The Democrats’ CRA play is, by their own admission, a cynical attempt to motivate their base in the upcoming mid-term elections.

Bi-partisan legislation to secure the precepts of Net Neutrality is feasible, but instead the Democrats prefer to showboat with the CRA.  In the long run, however, they are likely to find that this approach has as much wisdom as betting on Hillary Clinton.

Lawrence J. Spiwak is the President of the Phoenix Center for Advanced Legal & Economic Public Policy Studies (www.phoenix-center.org), a non-profit 501(c)(3) research organization that studies broad public-policy issues related to governance, social and economic conditions, with a particular emphasis on the law and economics of the digital age.