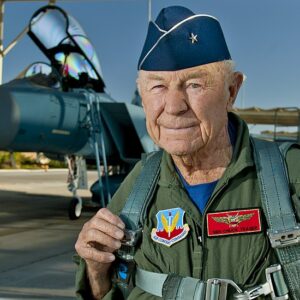 Chuck Yeager, a Real Hero, Breaks Through in New Book

Winston Churchill used to advise young people to read “Bartlett’s Familiar Quotations,” the oft-updated compilation of brief quotes from just about anyone who said something memorable. Of course, Churchill added more than a few of his own. He may have added more to the storehouse of aphorisms than any writer since Shakespeare.

But others have been no slouches. If you want to go back a bit, Napoleon wasn’t unquotable, and such writers as George Bernard Shaw and Oscar Wilde were prolific with wit and wisdom served up in brevity. Mark Twain was a treasury of quotable sayings all by himself. In our time, Steve Jobs has made some pithy additions, and Taylor Swift, in her lyrics, has some arresting and quotable lines.

The quote, to me, is distilled wisdom in a few words, often funny, whether it came from Dorothy Parker, Abraham Lincoln or the Beatles. A picture may be worth a thousand words, a quote believed to have been first formulated by Henrik Ibsen, but a well-chosen aphorism is worth many more than a thousand words.

So, it is thrilling to know that Victoria Yeager, widow of Chuck Yeager, aviation’s greatest hero, has collected his sayings into a book, “101 Chuck Yeager-isms: Wit & Wisdom from America’s hero.”

Yeager came from the small town of Hamlin, W.Va. Even today, it has a population of just over 1,000. Being from one of West Virginia’s famous hollows, Yeager said of it, “I was born so fer up a holler, they had to pipe daylight in.”

The journey began modestly with Yeager joining the Army as a private after high school and led to his success as a fighter ace with 11.5 kills — one involved another U.S. aircraft and, hence, the half — but Victoria Yeager told me there were more not officially recognized. She said he may have shot down as many as 15 German aircraft over Europe.

Shot down himself over France in 1944, the Germans watched his parachute float down and went out to find him. Yeager said, “There ain’t a German in the world that can catch a West Virginian in the woods.” And they didn’t.

In an interview for “White House Chronicle” on PBS, Victoria told me that Yeager always insisted that there be fun in everything, whether it was aerial fighting, flying through the sound barrier, or flying aircraft that might kill him. “You gotta have fun in life, whatever I did, I always included fun,” he said.

Yeager, Victoria said, maintained critical aircraft like the X-1, in which he broke the sound barrier himself. That way, he knew and there would be no excuses. He said, “In the end, or at the moment of truth, there are only excuses or results.”

Victoria told me the impression given in the movie “The Right Stuff” of Yeager as a reckless daredevil who rode a horse up to his aircraft, took off, and broke the sound barrier was pure Hollywood. Yeager was a consultant to Tom Wolfe during the writing of the book “The Right Stuff” to ensure accuracy. In fact, Victoria said, it was on the ninth flight that he broke the sound barrier. It is true that the horizontal stabilizer on the plane wasn’t working, but Yeager was able to control the plane with a manual trim tab, she added.

Yeager fought in World War II because it was his duty to fight, as he saw it. After being shot down, he wanted to keep fighting; when the military wanted to send him home, he appealed the decision all the way up to Gen. Dwight Eisenhower and won the right to fly in combat again. He said of duty, “You’ve got a job to do, you do it, especially in the military, when I was picked to fly the X-1, it was my duty to fly it, and I did.”

Yeager’s philosophy may have been summed up in this quote, “You do what you can for as long as you can, and when you finally can’t, you do the next best thing; you back up, but you don’t give up.”

That is the spirit that kept Yeager flying for pleasure until his death at 97.

In our carping, whining, blaming times, it is a tonic to read the thoughts and something of the life of a real hero. Thank you, Victoria Yeager, for assembling this book.