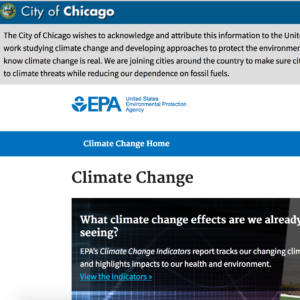 Global warming is once again a hot-button issue–and that isn’t just because temperatures in Washington, D.C. have reached the 90s. President Obama made the Paris Climate Accords a central part of American environmental policy and his personal presidential legacy. Now that Donald Trump is in the Oval Office, the U.S. has not only pulled out of the agreement, information about climate change was removed from the Environmental Protection Agency website in late April. This week, the mayors of twelve cities developed their own sites to keep the information online.

“Deleting federal webpages does not reset the scientific consensus that climate change is real,” said San Francisco Mayor Ed Lee in a statement. “The American people are entitled to the publicly-funded EPA research on climate change. And while the federal government continues to undermine the progress we’ve made on climate change, cities are taking a stand. San Francisco will continue our fight against climate change by taking aggressive local actions to protect our citizens and planet.”

Chicago Mayor Rahm Emanuel was the first to announce the republication of the information in a web post on Sunday.

Lee and Emanuel were joined by the mayors of Atlanta, Boston, Evanston, Fayetteville, Houston, Milwaukee, New Orleans, Philadelphia, Portland, Seattle, and St. Louis. The mayors are also part of a group of 270 U.S. mayors who pledged to honor the goals of the Paris climate accords by pledging to promote electric vehicles and to cut emissions.

The city-maintained sites allow access to archived versions of the EPA pages on climate change, causes of climate change, and how human activity is causing the climate to warm. The pages had been quietly removed from the agency’s website in late April, causing uproar among environmentalists.

EPA head Scott Pruitt has expressed doubt over man-made climate change, telling an interviewer in March that, he did “not agree that it’s a primary contributor to the global warming that we see.”

However, the EPA’s public affairs department has stressed that the EPA website was being updated, not removed. J.P. Freire, the EPA’s associate administrator for public affairs, told CNN in April that the agency was working “to eliminate confusion by removing outdated language first and making room to discuss how we’re protecting the environment and human health by partnering with states and working within the law.”

The information contained on the EPA website includes basic science on climate change, ways in which the weather is impacted by greenhouse gas emissions, and federal policies undertaken to mitigate these effects. The pages do not include any research or information that can only be obtained through the EPA website.

The EPA website still contains information about how climate change affects the water sector, as well as information about greenhouse gases and global warming potentials. That isn’t enough for the mayors, however, who see American withdrawal from the Paris Agreement as the first sign of a schismatic shift in environmental policy.

The mayors’ move comes as the U.S. reiterated its commitment to leaving the Paris Climate Agreement by refusing to join breakout sessions discussing global warming policy at the recent meeting between G7 environmental ministers in Bologna, Italy. Pruitt only attended the summit’s first day on Sunday, before returning to Washington and leaving Acting Assistant Administrator Jane Nishida to represent the U.S.

While other members of the group lamented the lack of American participation, the Trump administration believes that other mechanisms exist to promote pollution reduction and energy efficiency. In a formal statement, the U.S. said that it would continue to “engage with key international partners in a manner that is consistent with our domestic priorities, preserving both a strong economy and a healthy environment” and believes that the most effective way of achieving these goals is to work outside of the Paris Agreement.

“We are resetting the dialogue to say Paris is not the only way forward to making progress,” said Pruitt on Monday. “Today’s action of reaching consensus makes clear that the Paris Agreement is not the only mechanism by which environmental stewardship can be demonstrated. It also demonstrates our commitment to honest conversations, which are the cornerstone of constructive international dialogue.”

“The United States will continue to show leadership by offering action-oriented solutions to the world’s environmental challenges. We have indicated a willingness to engage on an international stage that stands to greatly benefit from American ingenuity, innovation, and advanced technologies. We have already demonstrated significant progress towards mitigating environmental problems and we will continue to develop these for the benefit of all nations,” he continued.

Pruitt points out that, without the Paris Agreement, the United States has already cut its emissions to 1994-levels.